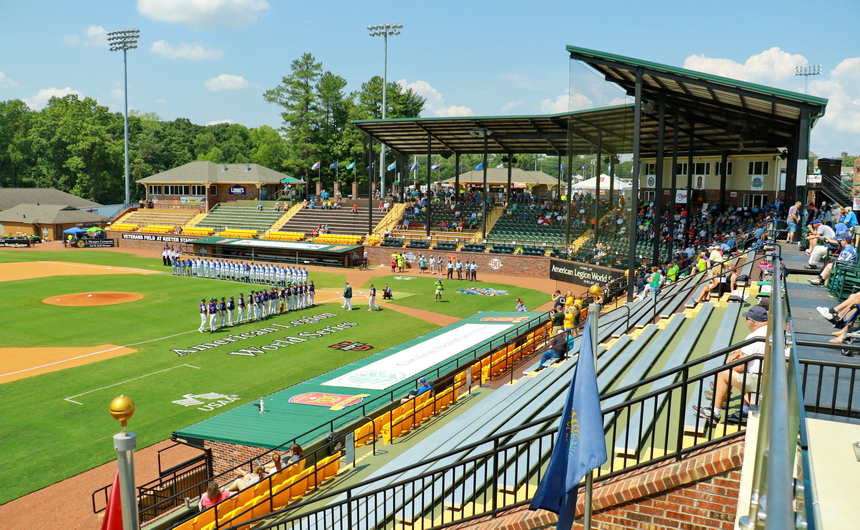 The Retif Oilers on the first base line and Cromwell, CT players on the third base line recite the American Legion pledge of good sportsmanship prior to the start of their game on Friday in Shelby, NC. Retif won, 2-1.

View the Photo Gallery of Game 1 of the American Legion World Series: Retif vs Cromwell, CT

A win is a win is a win. For the scrappy Retif Oilers of New Orleans, Jesuit High School, and Louisiana, their 2-1 win on Friday afternoon over Cromwell, Connecticut (the Northeast region champion) in the American Legion World Series was a huge relief.

“We played a tough team,” said Retif Coach Joey Latino. “Connecticut came out here yesterday and was a little flat. They lost (to Great Lakes) by a big margin (13-1). But I give them credit. Connecticut came out today and their pitcher did a heck of a job. He kept us off-balanced and made big pitches when he wanted to. When you’re in pool play, you have to get that first win under your belt and we did that today. Doesn’t matter the score. We’re 1 and 0 in pool play and tomorrow we try to get a second win.”

Retif (32-6-1) will play the Southeast regional champions from Chapin-Newberry, SC on Saturday, Aug. 156 at 4 p.m. (3 p.m. New Orleans time). The South Carolina team’s record coming into the Series was 28-0. Brandon Briuglio is expected to start for Retif. 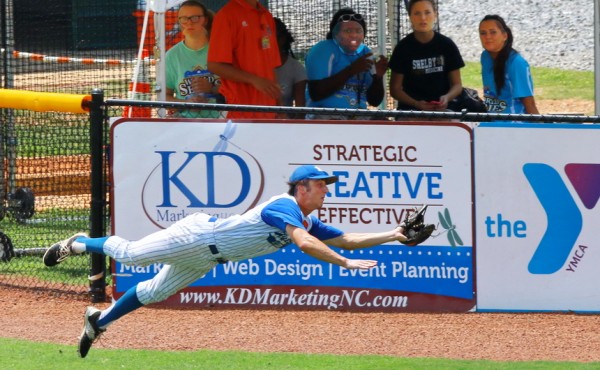 Ben Hess dives for a foul ball and makes a spectacular catch to end the fourth inning for the Connecticut team.

“I’m leaning towards Brandon because I liked the way he threw in the Mid-South tournament,” Coach Latino explained. “It’s either going to fall on him or Davis Martin; they’re our number two and three pitchers.”

In the Oilers’ opener against Cromwell (37-6), Coach Latino sent his ace right-hander, Mason Mayfield, to the mound. Mayfield pitched seven innings, giving up one run on five hits. He walked three batters and struck out two. For the last two innings, David Boh was plucked from the bullpen to shut down the northeast boys. Boh didn’t allow any hits or walks. He struck out one batter and the other five either grounded or flied out.

“Mason didn’t have his best stuff, but he competed and got us to the eighth inning,” Coach Latino told reporters after the game. “David Boh came in and did what he’s supposed to do as a reliever, just pound the strike zone and let his defense work. A zero in the errors column is big. The few times they had some opportunities against us, we were able to come out clean and that’s important in a game like this. I’m not pushing any panic buttons because it’s been four or five days since we’ve seen live pitching. Leaving 12 on base is uncharacteristic of us. We have to come out tomorrow a little more focused and get some timely hits.”

The Oilers had to grind the bats for their eight hits. Ben Hess, whose .545 batting average coming in to Shelby is second highest among all the players, was 2-for-5. He opened the top of the fourth inning with a double to the left center gap and was on third base with two outs when Hayden Fuentes doubled to right field. Hess’s run was the first of the game and the Oilers had a 1-0 lead.

Fuentes’s RBI double was hit on an 0-2 count. He hit a fast ball that should have been placed higher. “It looked like they tried to elevate him and the pitcher’s frustration showed up,” said Coach Latino. “I don’t think he got it up quite as high as he wanted to. Hayden did a good job. He stayed on top of it and hammered it.” 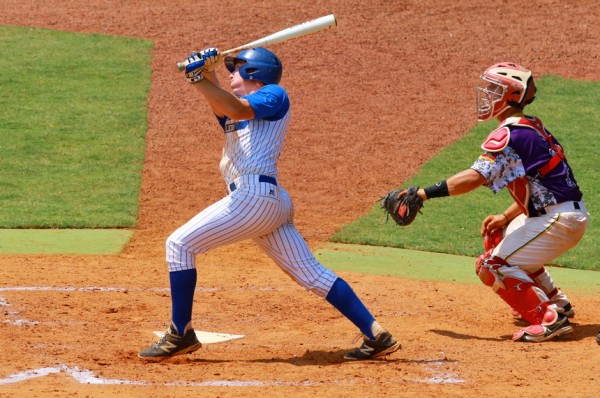 Hayden Fuentes swats an RBI double to right field in the fourth inning, scoring Ben Hess who was on third base. The Oilers jump out to a 1-0 lead.

In the bottom of the fifth, Cromwell had a chance to tie but Hess and catcher Trent Forshag teamed to deny Connecticut a run. With runners on first and second, a Cromwell batter singled to right field. The runner from second base turned the corner and headed for home. Hess delivered a one-hopper to Forshag who tagged out the runner at the plate in one of the more dramatic plays of the game.

“It feels really great to make those kinds of plays,” said Hess. “But if my team doesn’t do what they do, what I do doesn’t matter at all… I knew the runner was on second base when the ball was hit and I just threw the ball as hard as I could hoping for the best. It didn’t look like he was out from where I was standing, but the umpire called him out so he must have been out.” (For the record, the runner was out.)

Coach Latino said the play at the plate was a huge momentum turner. Had the runner scored, the game could very well have gone into extra innings. “It was a huge play,” he emphasized, especially when runs are at a premium as they were in Friday’s game. 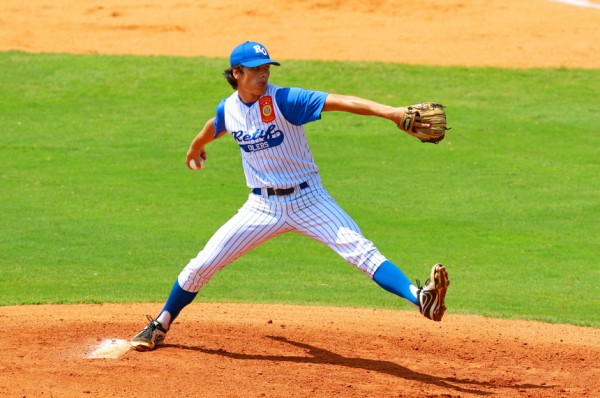 Mason Mayfield pitched seven innings, giving up one run on five hits. He walked three batters and struck out two. Mayfield’s pitch count was right at 100 before David Boh came in from the bull pen to relieve him in the eighth and ninth innings.

The Oilers added their second run for a 2-0 lead in the top of the seventh. Harrison Daste singled and advanced to second on a successful bunt by Nick Ray. Briuglio then singled to load the bases for Hess, who hit a high outside fastball to left field for an RBI single, plating Daste from third base.

“I’m in a groove,” Hess admits almost shyly. “The team has some energy going…. I just try to do what I can to help the team.”

Hess confirmed that all the teams experience a case of the nerves at the World Series. “Definitely the nerves,” he said, adding, “Once the first, second, and third innings roll by, it’s just like any other game.”

Hess should know as his older brother, Jonathan Hess ’12, was a pitcher when Retif won the 2012 World Series. The two brothers talk everyday but Ben said there’s no competitiveness between the two. “I’m in the outfield,” he said. “I’m not trying to show him up. Knowing that he won it in 2012, I want to replicate that.”

Ben Hess’s performance received a shout out from Coach Latino: “Ben has been like that all summer. He had an unbelievable Mid-South tournament. Defensively, he’s probably our best outfielder. He certainly has the strongest arm and (throwing a runner out at the plate from right field) he can do day in and day out.”

Cromwell’s solo run came in the bottom of the seventh via a double and two grounders that brought the runner around to home.

Retif (32-and Cromwell was the first of three games that were played Friday in the 2015 American Legion World Series Tournament. All games are played on Veterans Field at Keeter Stadium in Shelby, NC. Two years ago, the Legion changed the format of the Series for the eight participating teams, which are the champions of their respective regional tournaments. The World Series went from a double elimination tourney to a “pool” event. The change was reportedly made to increase the exposure of the Legion event on television.

The two pools are named ‘Stars” and “Stripes.” Retif, also known as the Louisiana team and the Mid-South regional champion, is among the Stripes, which includes Connecticut, the Southeast, and the Great Lakes. The “Stars” are teams from the Mid-Atlantic, Central Plains, Northwest, and Western regions. Sixty-four teams participated in the eight regional tournaments with the winners convening in Shelby for the World Series. Each team plays the other three teams in their respective pools. The top two teams in each pool play Monday, Aug. 17 in two semifinal games. The two winners of the semifinals meet Tuesday evening, Aug. 18, for the championship.

“This is a chess game and all the coaches are playing the same game,” said Coach Latino. “You’re moving your pieces, you’re trying to fit together innings. That’s why David Boh coming in for the eighth and ninth innings was big for us. We’ll just play one game at a time and see what happens.”