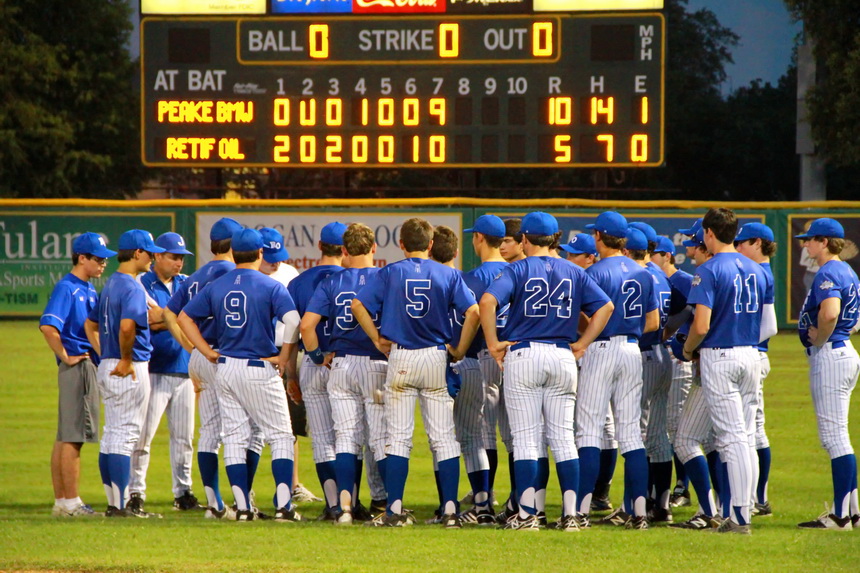 Retif Oil gave up 10 hits and nine runs in the final inning to blow the team’s opening season game against Peake BMW.

Retif, the Legion’s 2014 defending state champions, played well for six innings and had a comfortable 5-1 lead going into the final inning. 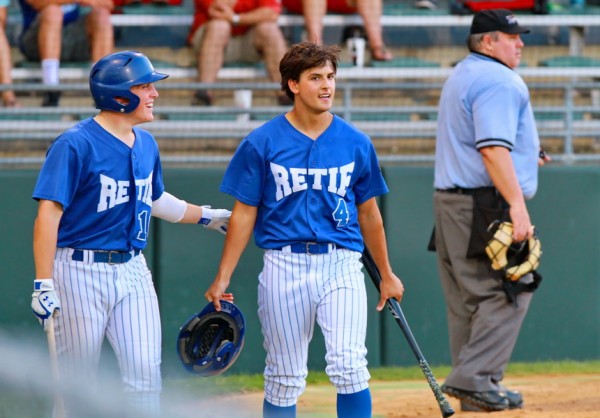 Dan Edmund (left) congratulates shortstop Alex Galy whose run in the bottom of the sixth gave Retif a 5-1 lead. Unfortunately, the lead went up in smoke as Peake came to life in the last inning.

And then the inexplicable unfolded in the top of the seventh as Retif crashed and burned, rolled over by Peake which scored nine runs on 10 hits. Retif’s only response in the bottom of the seventh was a single by catcher Trent Forshag, whose courtesy runner was left stranded.

The 10-5 win by Peake gives the Retif Oil players something to think about.

“You can’t play six innings of a seven inning ball game,” said Retif Oil Coach Joey Latino. “We have to learn the importance of every pitch, of every out. If giving up nine runs in the seventh inning doesn’t prove it to you, I don’t know what will. We just have to learn the hard lesson. You take a four run lead into the last inning, you must close it out. But there was no sense of urgency. We just went out there expecting this was going to be easy and it wasn’t.”

Retif used three pitchers starting with Mason Mayfield who went four innings, giving up one run on four hits. Logan Hornung relieved Mayfield and pitched the fifth, sixth, and some of the seventh. He gave up five runs on five hits, all in the last inning, and took the loss. With two out in the seventh, second baseman Brandon Briuglio was sent to the mound to finish off Peake, which was still playing on a full tank. Peake batters nicked Briuglio for five hits and four more runs.

Retif plays its second game of the new summer Legion season on Wednesday evening against Gauthier-Amedee at Kirsch-Rooney. First pitch is at 7 p.m.