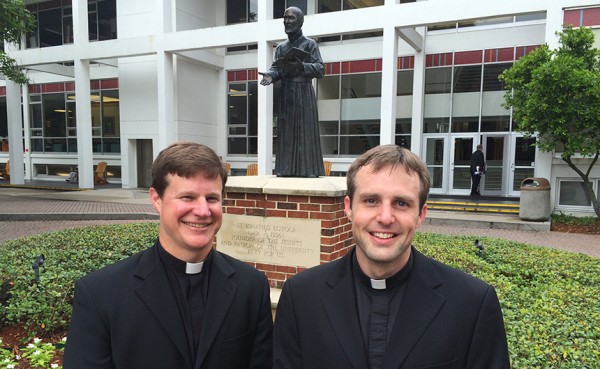 Eight Jesuits were ordained as priests at St. Joseph Catholic Church on Saturday, June 13. Among them were two Jesuits closely affiliated with the school — Fr. Randy Gibbens, S.J., an alumnus of Class of 1995 and Fr. Joseph Hill, S.J. Fr. Hill served at Jesuit High School for three years, from 2009-2012. In that time, he taught theology, worked in campus ministry, and served as a rugby coach.

Now that he is ordained, Fr. Gibbens will work in parish ministry in Honduras. Gibbens will celebrate his first Mass as a Jesuit priest at Holy Name of Jesus Church in New Orleans.

Meanwhile, Fr. Hill will serve as associate pastor of San Ignacio de Loyola Church in San Juan, Puerto Rico. His first Mass as a Jesuit priest will be celebrated at Immaculate Conception Parish in New Orleans.