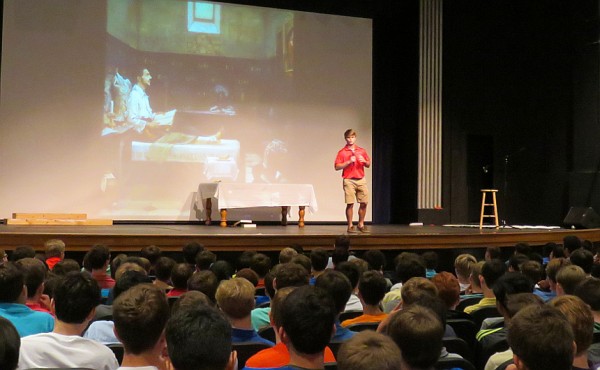 Student Body President Joseph Dupre makes a connection between his experiences at Jesuit and the conversion of St. Ignatius at the castle of Loyola.

On Saturday, Aug. 22, members of the Class of 2020 gathered at Jesuit for the Pre-Freshman Retreat. The evening allowed these new Blue Jays to come together as a class for the first time and reflect upon the life of St. Ignatius Loyola and to find ways to imitate his holiness and virtue. Grounding the night were two experiences that Ignatius had as a young man: the conversion during his convalescence in the Loyola castle following the battle of Pamplona and the subsequent pilgrimage to the Holy Land, where he stopped among other places at the Benedictine Shrine of Our Lady of Montserrat.

The retreat began with a skit of these two events in the life of St. Ignatius. The Pre-Freshmen enjoyed the representation of these classic moments of Ignatius (who was played by senior Brandon Wolff). The students also heard from members of Jesuit’s student organization for spiritual formation, Student Ministry. Seniors Joseph Dupre and Benji Creel spoke about the ways in which their own lives have been formed by lessons from the conversion of St. Ignatius in the castle.

After the first round of student talks, the 8th graders walked to the Student Commons for a team-building ice-breaker, in which they got to know each other through the pursuit of a group task. “The Lave Walk” had the students crossing a span of ground by using paper plates as stepping stones. Following a brief snack break, the students returned to the auditorium to hear talks by seniors Mayank Mardia and Aubrey Champlin about St. Ignatius’ self-dedication to the Lord at Montserrat.

The students then proceeded to small group meeting rooms to talk about their first week as Blue Jays and their hopes for the future. Following these discussions, the Class of 2020 went to Mass together as a class, where Fr. John Brown, S.J. presided and spoke to the students about cultivating virtue in their time at Jesuit. Following a pizza dinner, the group participated in a walking pilgrimage to the Church at St. Anthony of Padua parish. In imitation of St. Ignatius’ own walking pilgrimage, the students prayed before the many altars in the church, asking for graces in their time at Jesuit, leaving behind things that are holding them back from living according to their calling from God, and thanking God for the many talents and gifts He has given them in life so far.

The Pre-Freshman Retreat is the first of many retreats that students make in their time at Jesuit. In addition to growing in brotherhood with their classmates, each student was provided with the space to grow in his knowledge and love of God and was encouraged in his daily walk towards holiness. The theme for the night came from the book of Proverbs: “In his heart a man plans his course, but the Lord determines his steps.” Vital to the formation of students at Jesuit is this message of allowing the Lord to write the story of each student’s life, so that his way of acting and speaking in this life can all be for the greater glory of God.