Ginger Hall, wife of Del Hall of the Class of 1953, snaps a photo of her husband with a group of Blue Jays, including alumni director Mat Grau ’68, who is holding a book about Mr. Hall’s longtime career with CBS News as a photojournalist. The senior Jays in the group are, from left, Joe Kweon, Tyrus Norcise, David Zazulak, and George LeBlanc.

Longtime CBS News photojournalist Del Hall ’53 addressed the morning Assembly as part of Jesuit’s Alumni Speaker Series. (Watch video below.) Hall and his work are the subject of a new book by New Orleans historical geographer Richard Campanella, The Photojournalism of Del Hall: New Orleans and Beyond, 1950s – 2000s.

At Jesuit Hall lettered in wrestling and was a member of the 1951 state championship team. Following high school, he went to work as a cameraman and photographer for WWL-TV. Eventually, CBS came calling where he quickly became the national network’s go-to cameraman, shooting for 60 Minutes, the CBS Evening News (with Walter Cronkite and, later, Dan Rather), and On the Road with Charles Kuralt.

During his long career, he witnessed and documented the milestones and icons of the late 20th century: the Civil Rights Movement, Vatican II, the Beatles’ arrival in the United States, Martin Luther King, Jr., John F. Kennedy, the 1968 Chicago Riots, the Vietnam War, the rise and fall of the Berlin Wall. At least twice in his life, he has escaped tragedy: once, when he was chased by the Ku Klux Klan and then when his helicopter crashed while he was covering the America’s Cup race. This award-winning journalist from humble beginnings in downtown New Orleans has shaken hands with John F. Kennedy, Bobby Kennedy, Dr. Martin Luther King, Jr., Pope John XXIII, and John, Paul, George, and Ringo.

Hall addressed Monday’s morning Assembly, which was moved into the Student Commons by inclement weather.

Campanella and Hall will discuss their book Wednesday, Oct. 28 at 6 p.m. at Octavia Books, 513 Octavia Street, New Orleans. They will also appear at the Louisiana Book Festival Saturday, Oct. 31 at the State Capitol in Baton Rouge, with a presentation at 1 p.m. The book is available from LSU Press.

Students, faculty, and staff are invited to attend a presentation on Thursday, Oct. 29 at 3:15 in Room 329 to hear more of Hall’s stories about the iconic events of the 20th century he covered as a photojournalist. 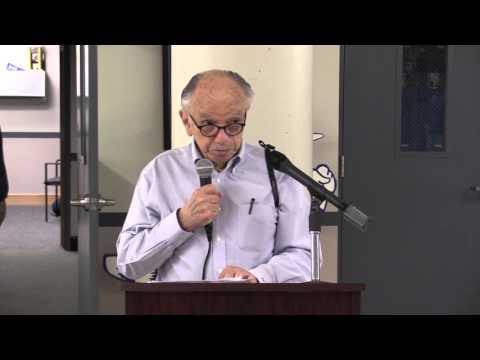