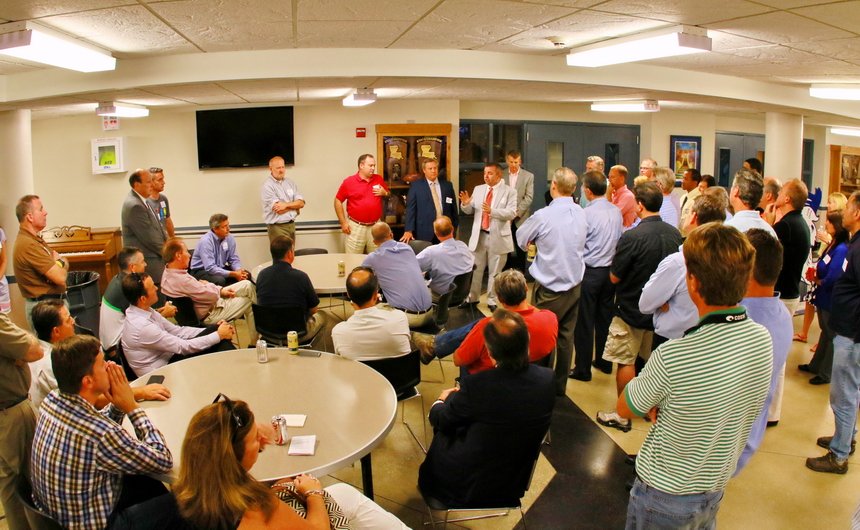 PAG drive chairman Philip Nimmo talks with captains about their importance to the annual campaign.

The 2015-16 Parents’ Annual Giving drive took several steps forward Tuesday evening by bringing together scores of class captains and the campaign’s leadership team for an upbeat and positive event that included a measure of spirituality, a dose of speeches, a liter of gastronomy, and a beaker of responsibility.

The PAG drive’s event was the annual captains meeting, and it started with Mass in the Chapel of the North American Martyrs, followed by dinner and taking care of business in the Student Commons.

At Jesuit, the PAG drive is critical because it keeps the school affordable, accessible, and thriving. As such, students and their families have important stakes in ensuring that the drive is successful.

Tuition for the 2015-16 school year is $8,550. The actual cost of educating a Blue Jay is $11,385. The difference is the GAP of $2,835. Historically, more than 90% of Jesuit parents participate in the drive, giving what they can to help bridge this gap. Parents have pledged and donated more than $1 million to each of the past 11 drives. At the same time, 3,600 alumni contributed $1.3 million to the Living Endowment Fund, which has the same purpose as PAG. All these donations go directly into Jesuit’s operating budget. 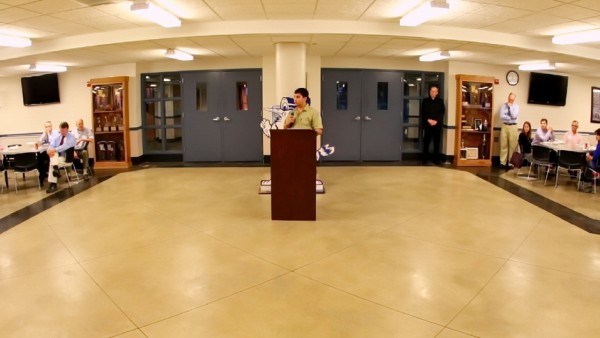 PAG (and LEF) donations are NOT used for financial aid. The source of financial aid for numerous families (approximately $600,000 for the current school year) is Jesuit’s endowment fund.

“We couldn’t do this without your help as captains,” PAG chairman Philip Nimmo told the gathering of volunteers in the Commons. “Your job is small but it’s important.”

“I didn’t have the fortune of going to Jesuit, but I look at this school as sacred ground,” said Nimmo, adding that “Jesuit is a special place. When you hear the experiences your sons have each and every day, or you don’t hear anything they’ve said each and every day, you know Jesuit is doing a great job. You’re invested heavily in Jesuit High School and they are investing in your sons and in the leaders of tomorrow.”

PAG captains also listened to remarks by senior David Keller, who is the son of Gina and David Keller, Sr. ’83. Keller told parents he has grown to love Jesuit in ways he never thought possible.

“I have witnessed slackers with no ambition turn into straight A students,” said Keller. “I have taken part in heated debates about politics at lunch tables. I have witnessed cultural and socio-economic boundaries vanish in conversation. I have grown up with some of the best upcoming citizens of New Orleans in-between these very walls. And without the low tuition and financial support offered by the efforts of the PAG, I’m sure a lot of these miracles would not have happened. It is the generosity and dedication by you all that make my environment every day one that is unrivaled anywhere in this city.”

Keller thanked parents “for all that you do to keep Jesuit as the wonderful institution it is, and thank you for setting the example for your son who will be sitting in your seat in the coming decades.”