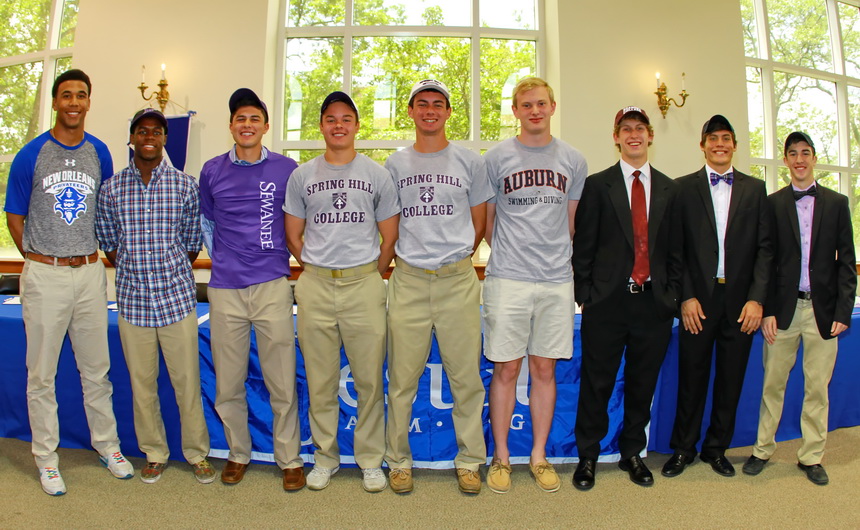 “Today is a wonderful day for these nine Blue Jays who are finalizing their commitments to play on an NCAA athletic team,” said Jesuit athletic director Dave Moreau, who introduced each of the athletes and their coaches to the lunchtime crowd in St. Ignatius Hall. “To be at this point where you are today, you have God-given talent and skills and you’ve received sound guidance and tutelage from your parents, family, coaches, and teachers. You brought drive, effort, competitiveness, and a teachable spirit in developing not only skills, but also a set of standards and values.” 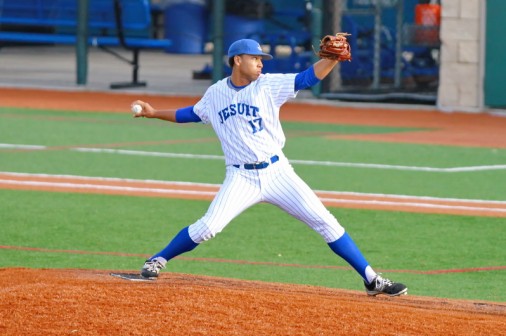 The nine Blue Jays who made their commitments official are:

Baseball
Myles Blunt (6’5”, 215), a starting pitcher with a 6-1 record and an ERA of .068 on Jesuit’s 2015 district championship baseball team, will attend the University of New Orleans. Against Ruston in the opening state playoff game, Blunt threw a complete shutout, using only 68 pitches to do so. He led the team in WHIPS (walks and hits per innings pitched), which is a good measure of how effective a pitcher is at keeping runners off the bases.

“Myles has made tremendous strides, both on a personal level and as a baseball player,” said Joey Latino, head coach of Jesuit baseball. “He has a great work ethic and is very coachable. More importantly, Myles has grown into being a great teammate. UNO is getting a good baseball player, but they’re also getting an outstanding young man which is way more important.” 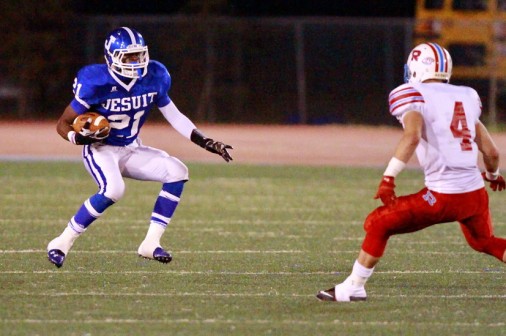 Football
Malcolm Ben (5’9”, 175), a running back, wide receiver, and special teams player on Jesuit’s 2014 state championship football team, will attend Millsaps College in Jackson, Mississippi. In his senior year, he had 19 receptions for 184 yards (avg. 9.7 yds.) and one touchdown.

“His statistics are misleading because Malcolm was somewhat of a distraction for other teams,” said Mark Songy, head coach of Jesuit football. “When we stick him out there, he was a very sure-handed receiver and he allowed some of our other guys to get open. He gave us more depth at running back by unselfishly going over to play receiver. Malcolm is a fine young man of character and he has been a pleasure to coach. He provided an excellent example for our young guys to follow. Malcolm will do extremely well at Millsaps. The only thing that bothers me about this is I won’t have him for another year.” 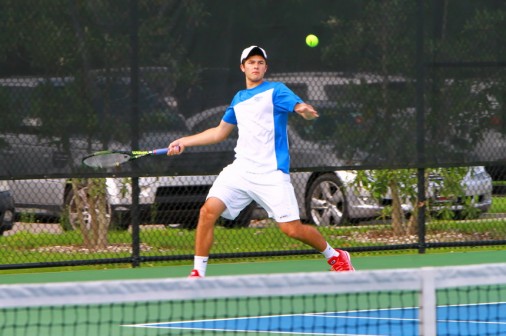 Alex DePascual will play tennis at Sewanee: The University of the South.

Tennis
Alex DePascual (6’0”, 160), a member of Jesuit’s 2012, 2013, 2014, and 2015 state championship tennis teams, will attend Sewanee: The University of the South in Sewanee, Tennessee. DePascual was a solid anchor and a dynamic singles player who was aggressive and power-oriented.

“We all want to play tennis like Alex, but we often don’t have the courage to play like he plays,” said Travis Smith, head coach of Jesuit tennis. “What I mean by that is that Alex hits the ball hard and with as much topspin as professional players. He’s not afraid to pull triggers on big shots. It’s remarkable that of this talented senior class of Blue Jay tennis players, Alex is the one who’s going on to play college tennis. His game is still literally improving and the Sewanee coach is getting one heck of a player. Alex has the true heart of a champion.” 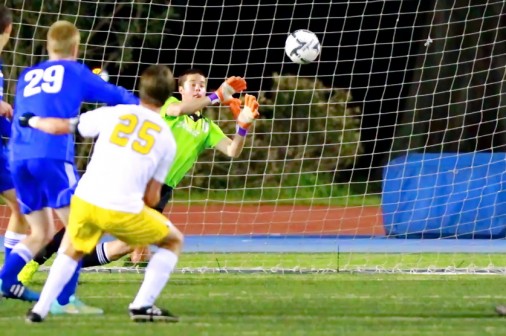 Soccer
Otto Candies (6’0”, 175) and Jack LaForge (6’2” 165), captains of Jesuit’s 2015 soccer team that won the district championship and was the Division 1 state championship runner-up, will attend Spring Hill College in Mobile. Candies was Jesuit’s goal keeper; LaForge was a midfielder and defender.

“Otto is a very hard working player with excellent communications skills. His bravery, athletic ability, drive, and aggressive nature make him an outstanding goal keeper,” said Hubie Collins, head coach of Jesuit soccer. “Jack has exceptional technical skills and great awareness and vision on the field. His high fitness level, mental toughness, consistency, and leadership skills made him a very valuable member of the team.” 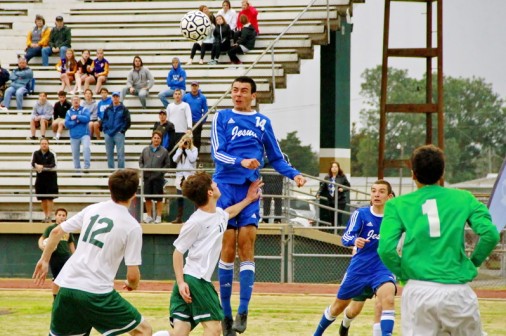 Coach Collins added that through Candies’s and LaForge’s leadership and hard work, and their leading by example, both played pivotal roles in the success of Jesuit’s soccer program. “I’m very proud of those guys for that,” he said, adding, “Well done and congratulations.”

Swimming
Chris Simmons (6’4” 200), a member of Jesuit’s 2013 and 2014 state runner-up swim teams, will attend Auburn University in Auburn, Alabama. Simmons was captain of the 2014 team. A four-year letterman who is up for All-American consideration, Simmons is one of the top swimmers to emerge from the storied program at Jesuit. 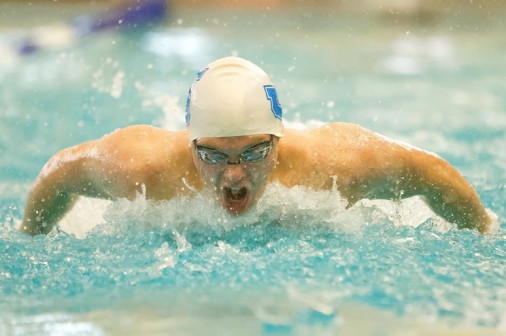 “Chris won the 50-yard freestyle and anchored the 200-yard medley relay team that won at the 2014 state swimming meet,” said Bret Hanemann ’85, head coach of Jesuit swimming. “His work ethic and attention to detail make Chris one of the premier swimmers in the state of Louisiana, providing him with an opportunity to swim for one of the nation’s elite collegiate programs.”

Lacrosse
Cameron Guernsey (5’9”, 155), a member of three state championship lacrosse teams at Jesuit (2013, 2014, and 2015), will attend Roanoke College in Salem, Virginia. A top tier attacker in state, if not the region, Guernsey sustained an injury that sidelined him for half of his senior season, yet he was still able to score 42 goals, assist with 19 others, and pick up 16 ground balls. 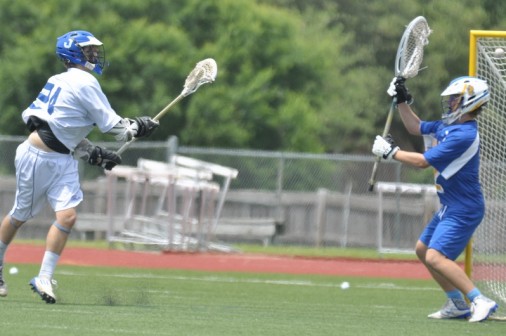 “I have no doubt that Cam will excel and become a premiere collegiate athlete,” said Nick Helinski, an assistant coach of Jesuit soccer. “One of the most light-hearted and dedicated people I’ve ever met, Cam often was comic relief when we lost our temper on the field a little bit. When he was injured, he took his lacrosse stick with him to the hospital.”

Garrett Perez (5’9”, 165), a midfielder on Jesuit’s 2012, 2013, 2014, and 2015 state championship teams and the first four-year champion the program has produced, will attend Millsaps College. In the season just completed, Perez recorded 24 goals and picked up 81 ground balls. Perez and Guernsey served as captains on the 2015 team and are All-State selections. 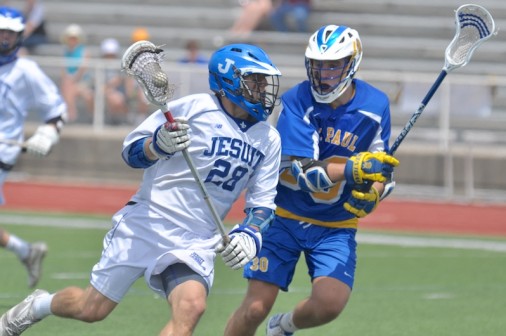 “Garrett is one of the strongest natural leaders I’ve known,” said Coach Helinski. “It’s going to take him very far in life — the way he handles himself and the way he handles his interactions with his teammates. It’s not an attribute that’s learned, it’s a natural skill.”

Jerry Spencer (5’8”, 140), a midfielder on the 2015 championship squad, also will attend Millsaps College. As a new member of the varsity team, Spencer scored five goals, forced 12 turnovers, and picked up 16 ground balls.

“Jerry is one of the greatest team players I’ve come to known” said Coach Helinski. “He is eager to learn, eager to play, and eager to become better. I hope the team chemistry between Jerry and Garrett continues up at Millsaps.” 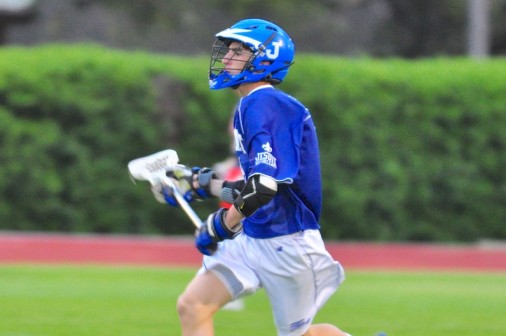 Coach Helinski added that Guernsey, Perez, and Spencer “exemplified outstanding sportsmanship and leadership throughout the season.”

In closing, Coach Moreau reminded Blue Jays that “it still takes someone else to believe that you can do something for them at the collegiate level. That person is your college coach. Be grateful for the confidence he has in you as a player and a person.”

He added that those college coaches will expect and rely on your being willing to put in a great deal of time; make great choices on effort and behavior every day; work hard in your curriculum of study; and represent your university with class.

“It is our hope that we at Jesuit have played some part in preparing you to have the wisdom to handle this responsibility and privilege, as well as the acceptance, compliance, and determination to fulfill what is expected of you as a soon-to-be collegiate student-athlete,” concluded Coach Moreau. “We are confident that all of you will. As you enter the college ranks, we hope that all of you will still remain connected to Jesuit. We wish you the best of luck and congratulations to you and your families.”