Newest Jays Welcomed to the Nest on Orientation Day

It was fitting that the alumni speaker at Investiture 2015 was a former Blue Jay baseball player. After all, for Jesuit’s newest students, Thursday, Aug. 13, was opening day.

After meeting their homeroom teachers, pre-freshmen and new 9th graders were escorted to the Chapel of the North American Martyrs by their Big Brothers for Investiture, a ceremony that was collaboratively created in 1998.

Barrios, who played baseball for the Blue Jays and Tulane University, challenged the school’s newest students to get involved. “Try out for a team, play in the band, join the Phils, or get involved in campus ministry,” he urged them. “Don’t let these upcoming years pass you by.”

Mr. Peter Kernion, a 1990 alumnus who took over as principal in 2013, stressed the importance of persevering. “It’s like I used to tell my cross country runners, a strong finish begins with a smart start.” Mr. Kernion urged his newest charges to work hard, be organized, and help each other, which includes asking for assistance when it’s needed.

The chapel presentation also included remarks from student body vice-president Felix Rabito ’16, who confessed he gave serious consideration to leaving Carrollton & Banks midway through his freshman year. Rabito admitted that making the commute from Mandeville everyday took a toll on him physically and mentally. Instead, he embraced the challenge and is glad he decided to stay. Today, Rabito is one of the school’s top swimmers, a member of Sodality, and a founder of the Odd Instruments Orchestra.

The chapel presentation concluded with a blessing and presentation of Blue Jay pins and the singing of the alma mater, led by senior Sterling Stafford, who was accompanied on the piano by his classmate Greg Fortier.

The new Jays spent the next several hours meeting their new teachers and getting a lay of the land, preparing them for the first full day of classes on Friday, Aug. 14.

The half-day session concluded with a rousing pep rally in Traditions Courtyard, which included a speech by Mr. Julio Minsal-Ruiz, S.J. — a Jesuit scholastic  — and spirited performances from Jesuit’s cheerleaders, student council, and the Blue Jay Marching Band. 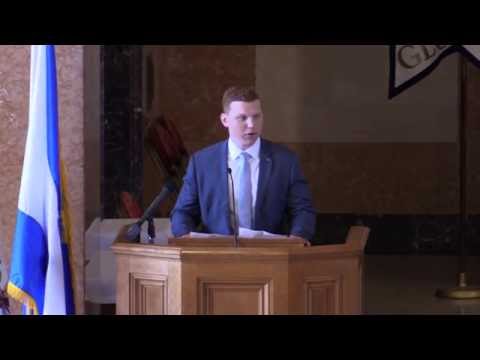