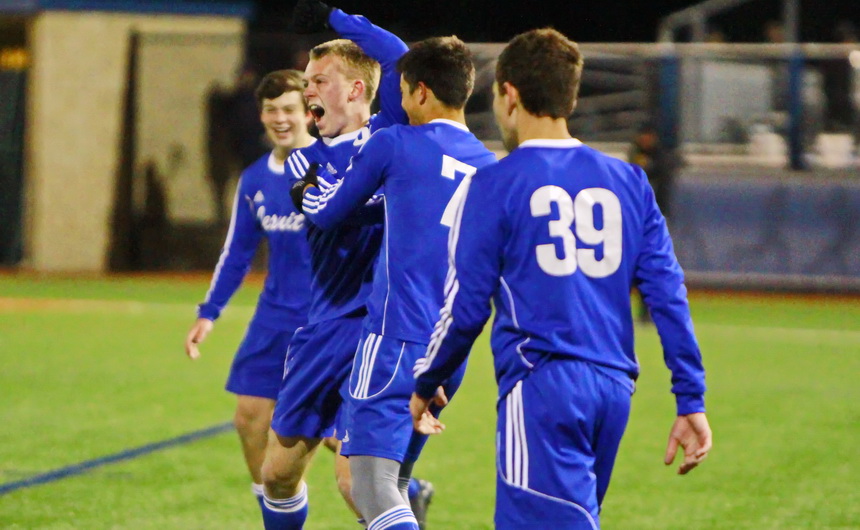 The Blue Jays celebrate Patrick LaCour’s goal in the 72nd minute of their match against Holy Cross. Up next: Brother Martin. The Jays and Crusaders get underway on Friday, Jan. 9 at 6 p.m. at John Ryan Stadium.

For the record, the Jesuit – Holy Cross varsity soccer match at John Ryan Stadium on Wednesday, Jan. 7 was won by the visitors.

It’s true, the visitors won, 1-0. But in this match, circumstances dictated that the Jays play the role of the visiting team, which they graciously did. Besides, it was perfect weather for soccer: a sharp breeze blowing out of the north at 25 mph with a wind chill close to 20 degrees.

The Jays dominated Holy Cross by controlling the ball but had trouble putting the ball in the goal. There were many, many “just misses.” The Tigers guarded their lair ferociously and it wasn’t until the 72nd minute that the Jays finally got a break. Patrick LaCour was in the right spot when the ball bounced off the head of a Tiger. LaCour launched a rocket from about five yards outside the box and buried it into the left corner of the Tigers’ goal.

The Jays bring an 11-4-2 record to their match against Brother Martin on Friday at John Ryan Stadium. Kickoff is at 6 p.m.

“We are improving with every match we play,” said coach Hubie Collins after the Jesuit – Holy Cross match. “We persevered, had lots of opportunities, persevered some more, and Patrick (LaCour) was in the right spot, struck the ball, and that was the match.”

The Jays are good at persevering and they plan on doing just that against the Crusaders.