Jesuit to Face Rummel in Second Round of Division 1 Playoffs 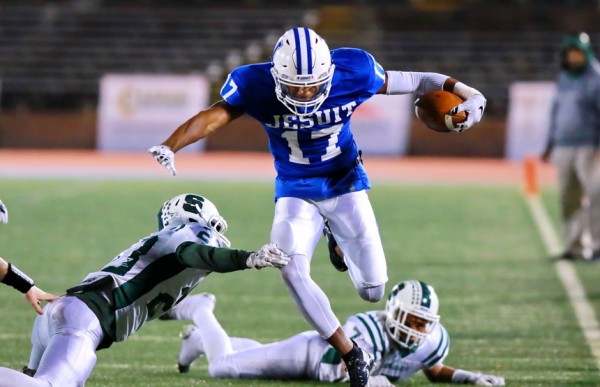 Against Shaw in the opening round of Division 1 playoffs, Kalija Lipscomb takes to the air to avoid being tackled on his way to the end zone. Lipscomb scored on this 20-yard screen play and added a second touchdown in the final quarter when he caught a long pass from quarterback Peter Hontas.

The Jesuit Blue Jays will face Archbishop Rummel in round two of the LHSAA Division 1 playoffs. The game is Friday, Nov. 20, at Joe Yenni Stadium in Metairie. Kickoff is at 7 p.m.

Jesuit downed Archbishop Shaw 35-21 last Saturday to move into the next round.

Jesuit’s win eliminated ninth-seeded Shaw from the playoffs and set up what should be a barn-burner of a game between the Jays and the Raiders. Jesuit is seeded eighth among the 10 teams competing for the Division 1 championship. Rummel is seeded first and well-rested. The top six seeded teams enjoyed byes for the opening round. The only other opening round game last week was Friday night between seventh-seeded Holy Cross and tenth-seeded St. Augustine. The Tigers eliminated the Purple Knights, 13-6.

“We’re looking forward to it,” said Coach Mark Songy about next week’s game against Rummel. The Raiders beat the Jays, 28-14, inWeek 7 of the regular season. “We left a lot of points on the field the last time we played them. Rummel’s certainly a fine football team. They’ve had a rest. We’ve got to come back from a Saturday to a Friday. So we’re going to have to play our best football game and prepare for it real, real well. And have a couple of things go our way next week. But we’re excited about the opportunity to advance.”

Pre-sale tickets are $8 each for adults, students, and children (ages 6-11).  Pre-sale tickets will be on sale at the switchboard Wednesday through Friday from 8:00 a.m.-4:00 p.m. and on Friday in the Student Commons during lunch.  All tickets purchased at the gate are $10 each.  Please note that student IDs and season passes will not be accepted at the gate.

Look for a special tribute from the Blue Jay Band at halftime.