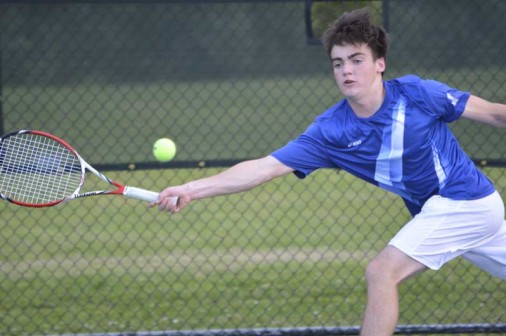 Junior Brandon Beck chases down a forehand in doubles competition against Newman on Thursday, March 19.

The varsity tennis team improved to 8-0 in dual meet play  with a 6-1 victory over the Newman Greenies on Thursday, March 19, at the UNO Tennis Center. The Greenies, last year’s state runner-up in Division IV, came into the match with a 5-1 dual meet record.

Senior Gregory Suhor, junior Jonathan Niehaus and his twin brother, Jacob, staked the Blue Jays to a 3-1 lead after the singles competition with wins on Lines 2, 3, and 4, respectively. The trio bested their opponents in three pro sets by a combined score of 24-2. On Line 1, senior Alex DePascual gave Newman’s Princeton Carter, the reigning Division IV state singles champion, all he could handle but ultimately dropped an 8-4 decision that was much closer than the score indicated.

“A couple of bounces here and there and that’s a whole different outcome,” said Head Coach Travis Smith. “Alex definitely showed he can run with the big dogs today.”

With Carter opting to sit out the doubles competition, the Greenies had no answer for Jesuit’s doubles teams. On Line 1, Suhor and junior Brandon Beck scored a shutout, as did sophomores Jack Steib and Trey Hamlin on Line 3. The Niehaus twins took an 8-1 victory on Line 2.

Next up for Jesuit is a tough Brother Martin squad on Tuesday, March 24. Match time is 4:00 p.m. at the UNO Tennis Center.