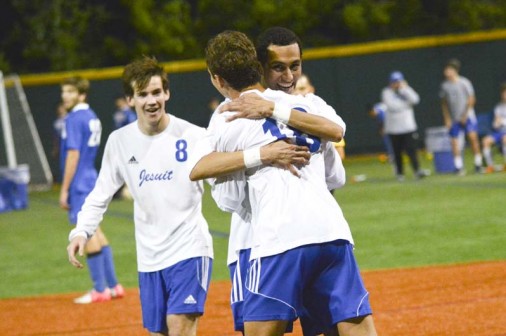 Braden Brignac comes in to join Jose Aleman in congratulating Colin
Parenton on Jesuit’s third and final goal of the evening. Aleman and Brignac scored the other two.

Jesuit’s soccer team gave the homecoming crowd its money’s worth on Saturday, Dec 17, playing Ocean Springs to a 1-1 draw for the first 64 minutes of action, a period that saw no shortage of shots on goal for either team.

But just when the Blue Jay soccer faithful began to entertain the prospect of a tie, or perhaps even a loss to the visiting Greyhounds, Jesuit struck with lightning quickness, punching in the go-ahead goal with 16 minutes left and the dagger 90 seconds later to emerge with a 3-1 win on Saturday, Dec. 12 at John Ryan Stadium.

All three Jesuit goals were assisted, a testament to the solid passing that coach Hubie Collins had praised after the previous night’s 5-0 win over Rummel.

Midway through the first half, senior Chase Rushing lifted a perfect pass to a streaking Jose Aleman. The senior forward beat the goalie to the ball and then drilled a shot into an open net.

Just before halftime, though, the Greyhounds answered with a goal of their own.

“I was a little worried going into halftime'” said Collins. “This was our seventh game in seven days, and I think it’s fair to say we had some tired legs out there. But the guys were able to dig deep and find the energy to keep attacking in the second half. I’m really pleased to come away with the win.”

Indeed, the Jays knocked on the door several times in the second half before breaking through at the 16-minute mark when Aleman sent a pass into the box where it was deftly headed into the net by sophomore Braden Brignac. Less than two minutes later, senior Charles Rice found junior Colin Parenton for the Jays’ final goal of the evening.

Jesuit’s tired legs will get a rest while their minds get a workout over exam week. The team returns to action on Wednesday, Dec. 23 for a 1:00 p.m. district home game against soccer arch rival Brother Martin.

CHECK BACK FOR PHOTO GALLERY 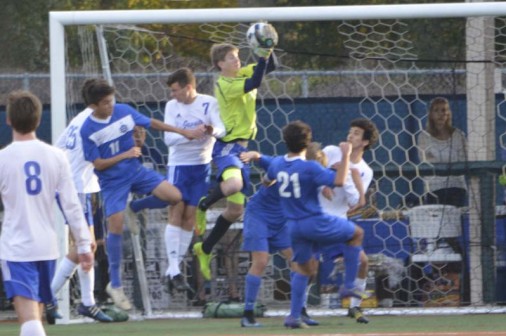 Sophomore goalie Shane Lanson got plenty of business against the Greyhounds. Here, he soars above the crowd to thwart a corner kick.