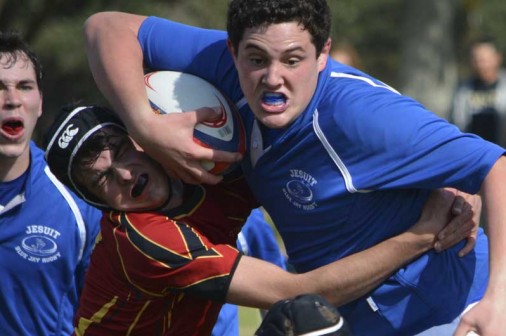 The Jesuit rugby team scored the go-ahead try late in the second half and held on down the stretch for win over the Brother Martin Crusaders on Saturday,  Jan. 18 in their season opener on the pitch at Harrison and Marconi in City Park.

The match pitted Jesuit’s methodical downfield marches against the superior team speed and breakaway potential of the favored Crusaders. In the end, it was slow and steady that won the race, as the Blue Jays notched four tries and three extra point conversions to take a 23-18 win.

The Jays’ defense (which in rugby is also the offense–no mass personnel shifts in this game) kept Brother Martin’s speed in check, allowing just one breakaway try.

Junior Scott Derbes earned “Man of the Match” honors (the equivalent of getting the game ball).

Coach Jim Hotard ’81 declined to name individual scorers, stressing that rugby involves sustained advances up the field with players being tackled all the while. Ball control and discipline are critical, particularly when you don’t have breakaway threats capable of field-length sprints. Capping off a drive by crossing the goal line and touching the ball down (thus the term” touchdown” in football) is largely a matter of whoever happens to be the next man up when the goal line is in sight. “To shine a spotlight on the guys who scored just isn’t what we want to do, nor is it consistent with what we’re stressing in practice” said Hotard.

Hotard did want to shine a spotlight, though, on his seniors.  “We’ve got a great group of seniors on the squad and their leadership was evident today,” he said, referring to Tony Celano,  Sam Clutter, Josh Duhon, Joel Epling, Josh Hudak, Josh Mackles, Cameron Minnard, and Matt Sevin. “Those guys have been great big brothers, teachers and role models.”

Next up for the team is a match with the Mississippi Gulf Coast club team on Jan. 23 at the pitch in Gretna.