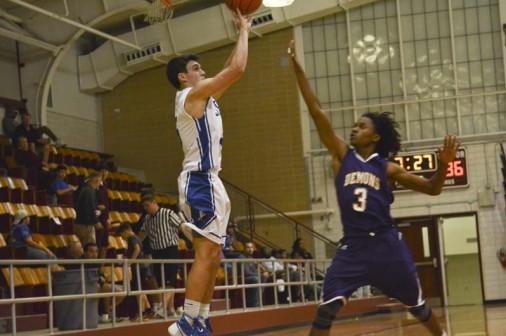 The Jesuit basketball team overcame a sluggish first half in which they spotted the Franklinton Demons a 22-14 lead and ultimately emerged with a hard fought 50-44 win in the opening round of the Chalmette Valero Christmas Classic on Thursday, Dec. 17.

Clutch three-point shooting from Brendan Conroy, who was 4-7 from beyond the arc en route to a game high 16 points, allowed the Jays to close within one point heading into the fourth quarter. In the final eight minutes, the Jays took the lead and held on down the stretch, converting six of eight free throws in the final minute.

Junior Chris Beebe also had a big night for the Jays, dishing out eight of the team’s 11 assists on the evening.

The story of the night for the Jays, however, was a stat that isn’t even officially kept: charges taken. By an unofficial count taken by polling the locker room after the game, Jesuit took seven charges on the evening. In a close game, that was likely the difference maker.

With the win, Jesuit improves to 4-6 on the season. The Jays will take on Chalmette in semifinal action on Friday, Dec. 18. Tip-off is set for 7:30 at Chalmette High.