Jays Soar Past Lake Area in CYO First Round 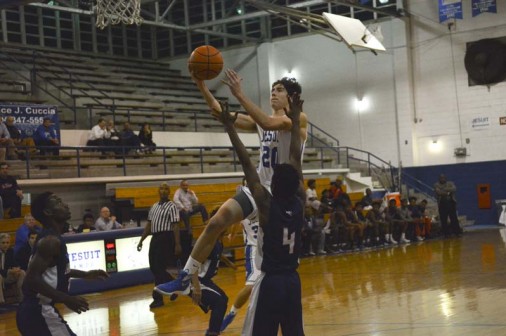 Junior Collin Kulivan and the Jesuit basketball team soared past the Lake Area Leopards to earn a winner’s bracket match-up with De La Salle on Thursday night at the Birdcage. Game time is 7:30.

“Every game is important, last night’s, tonight’s, and tomorrow’s and that’s the way we’re approaching it,” said Jennings, preferring to focus his attention on the team. Those who played with Jennings, against him, and for him, shouldn’t be surprised.

As they did on Saturday,  Nov. 28 against Warren Easton, the Jesuit basketball team played a solid first quarter of basketball in Wednesday night’s Allstate Sugar Bowl CYO Tournament opener against Lake Area. This time, however, the Jays kept it going for the rest of the game. The result: a 70-55 first round victory and a Thursday night winner’s bracket  date with the Cavaliers.

Senior Rob Weiss scored 20 points in the first half to stake the Jays to a 31-27 lead heading into intermission.

Defensively, there were plenty of the intangibles coaches love to see. In the first half alone, Jesuit took four charges and created two turnovers on five-second inbounds violations.

“We definitely came out with more energy and focus tonight,” said coach Jennings. “That’s a good win against a quality ball club.”

Weiss would finish with 29 points on the evening. Freshman Elijah Morgan added ten points, and junior Brendan Conroy scored eight, including two of Jesuit’s four three-pointers on the evening.

As the game wore on and Lake Area became increasingly desperate, a steady stream of Blue Jays made their way to the free throw line. Collectively, nine different Blue Jays sank 24 of 30 attempts from the charity stripe on the evening, a far cry from their 8 of 19 performance four nights earlier.