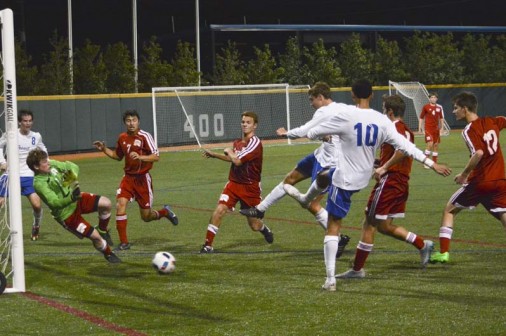 Colin Parenton and Jose Aleman both took a stab at a carom in the box from a missed header. Parenton (on the left) connected for Jesuit’s second goal of the evening.

Jesuit’s defenders didn’t allow a single shot on goal in the first half, and the offense provided plenty of support as the Blue Jay soccer team cruised to a 5-0 district win over the Rummel Raiders on Friday, Dec. 11 at John Ryan Stadium.

Sophomore Braden Brignac opened the scoring for the Jays with an unassisted goal at the 27-minute mark of the first half. Fifteen minutes later, junior Colin Parenton picked up a goal after a carom in the box put the ball conveniently near his right foot. A pair of seniors teamed up for Jesuit’s third goal of the evening, which came with five minutes remaining in the first half. Patrick Rye drilled a laser into the net off a perfectly-placed corner kick by Jose Aleman.

“I thought we got into a nice passing rhythm in the first half,” said coach Hubie Collins. “Chasing us around the field wore them down a bit and we were eventually able to get on the scoreboard.”

The second half remained scoreless until penalty time, when senior Matthew “Matty Ice” Zeringue found the goal for the first time this season. Just before the final whistle, senior Cole Retif headed in a goal off a free kick from junior Davis Friend.

“It was good to see some fresh faces get on the scoreboard,” said Collins.

With the win, Jesuit is now 9-2 on the year, with eight of those wins coming on shutouts. Next up is a match with Ocean Springs (Mississippi) on Saturday, Dec. 12 at John Ryan Stadium. The game is designated as Jesuit’s Soccer Homecoming game, with pregame festivities starting at 3:00 for soccer alumni and their families (click for more information). Kick-off is set for 4:00 p.m. 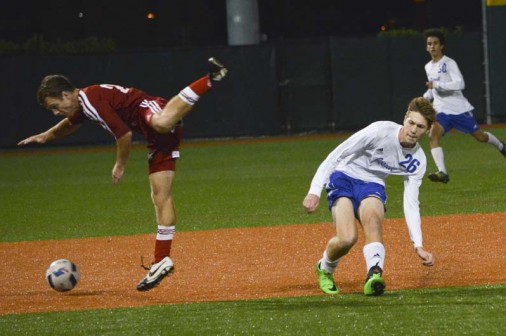 Matthew “Matty Ice” Zeringue made the most of his time on the field, upending this Raider and scoring a late goal in the Jays’ 5-0 victory over Rummel.