Jays Put Bite on Gators in the Swamp 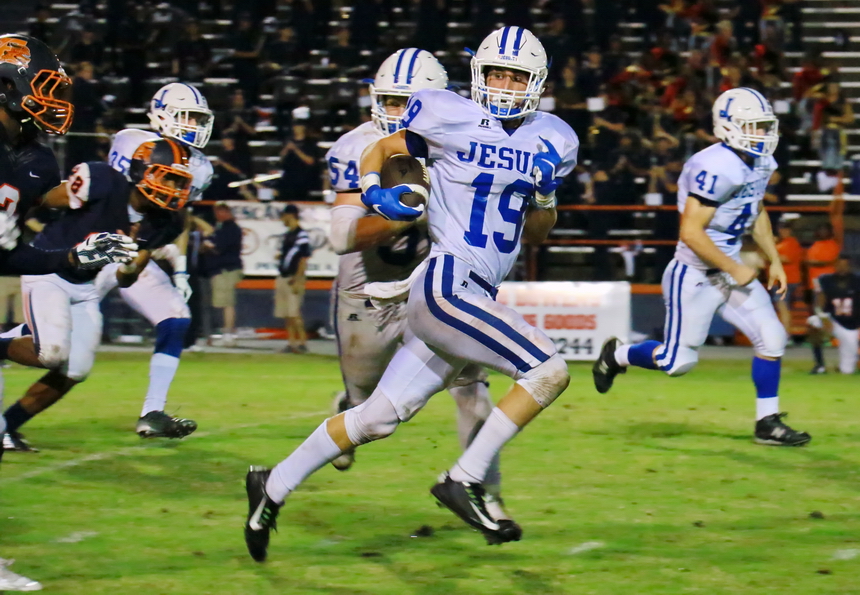 Defensive back Patrick Spiers runs back an interception in the waning moments of Jesuit’s Friday night win against Escambia, 28-17.

View the Photo Gallery of the Jesuit – Escambia Game

The Blue Jays traveled to Florida’s Panhandle on Friday of Week 3 and conquered the Escambia Gators, a previously undefeated team and reportedly one of the best in the region.

Jesuit (2-1) scored four touchdowns and made several big plays on offense and defense to effectively tie up the Gators, 28-17, on their own field, which they’ve dubbed the Swamp.

The Jays got down to business on the opening possession, consuming more than seven and a half minutes and driving 80-yards to for the first touchdown. Running back Connor Prouet took the ball into the end zone on a two-yard run.

Two minutes before the end of the first quarter, the Gators were backed up deep in their own territory when defensive end Zack Robert got a glove on a lateral pass. It bounced into the end zone and Henry Moreau, the Jays’ other defensive end, fell on it for Jesuit’s second touchdown. 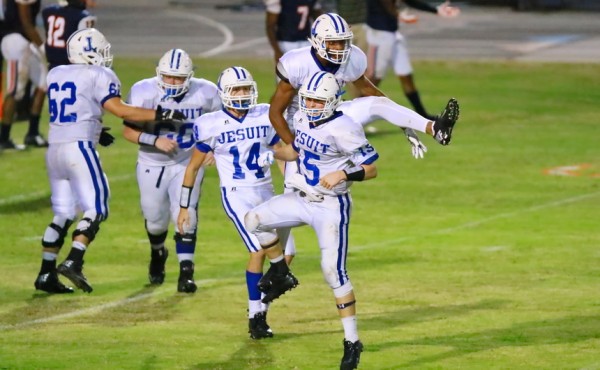 Wide receiver Kalija Lipscomb and quarterback Peter Hontas jump in a TD salute early in the third quarter of the Jays’ game Friday night against Escambia. Hontas had just thrown a long pass to Lipscomb, who caught it on the Gators’ one-yard line. He took one big stride into the end zone for the Jays’ third touchdown.

Jesuit’s 14-0 lead almost held up, but with four seconds left in the first half, Escambia scored on a run from about five yards out. To start the second half, Jesuit’s Crew Jacobs (who was 4-for-4 on PATs) showed the Gators his pooch kick, which defensive back Jandon Briscoe recovered to start the Jays’ offense on Escambia’s 40-yard line. Ninety second later, quarterback Peter Hontas tossed a 30-yard pass to wide receiver Kalija Lipscomb on the one-yard line. Lipscomb out-jumped and out-muscled his defender to come down with the ball, taking one stride into the end zone for the Jays’ third touchdown, one which extended their lead, 21-7.

Escambia kicked a 28-yard field goal late in the third quarter to cut into Jesuit’s lead, 21-10. The two teams traded several punts, and Escambia tried to spring loose their top runners. But just when the Gators looked as if they were on the move, the Jays’ defense dug in.

Jesuit fans have been waiting patiently for Jakirai Wiley — defensive back/ running back/ special teams punt returner — to break one open. Their wait is over. Wiley looked as if he snuck into the backfield for the first time in the game. And maybe he did. With five minutes left on the clock and Jesuit working from its own 44-yard line, quarterback Hontas pitched out to Wiley, who tucked the ball and spotted a narrow opening carved out by tight end Evan Slattery and offensive linemen Nick Gauthé, Fletcher Lavie, and Austin Reed.

Wiley dashed past the Gator linebackers and all he had to do was get by one defensive back. With a juke here and a juke there, Wiley raced 56 yards for the Jays’ fourth touchdown. That lone Gator in the secondary almost brought Wiley down a couple of yards shy of the end zone, but the fleet-footed senior proved too much to handle. The best the defensive back could do was trip up Wiley as he crossed the goal line. Too little, too late, and the Jays padded their lead, 28-10.

Those pesky Gators seemed to emerge from hibernation in the closing minutes of the game, scoring on a nice 70-yard punt return to make it a 28-17 game. The TD certainly woke up Escambia fans. The Gators attempted an onside kick, but the Jays fell on the ball. Jesuit’s goal was to run out the clock, but instead, they ran out of downs. Jacobs, the senior kicker, once again trotted out to punt. 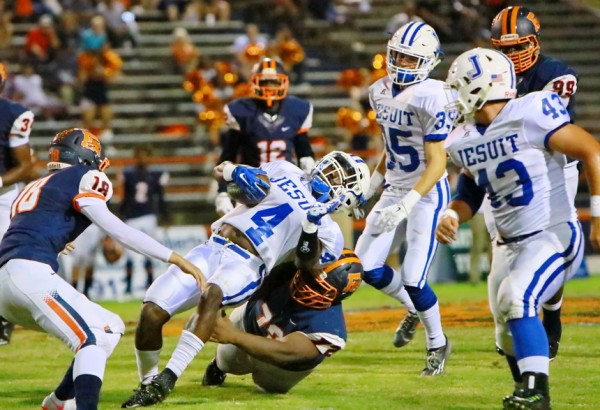 On a punt return, Jakirai Wiley runs it back 30 yards, but is taken down with a horse collar tackle, a penalty that gave the Jays better field position.

The Gators attempted a long pass to Jesuit’s 10-yard line, where the intended receiver and linebacker Marc Dougherty both leapt high. Dougherty deflected the pass… right into the hands of defensive back Patrick Spiers, who ran the interception back to the Gators’ 40-yard line and helping to preserve Jesuit’s 28-17 victory, their second consecutive win of the young season.

Coach Mark Songy said “absolutely” he and the Jays wanted to return to Carrolton and Banks with a win, adding: “Just watching us grow up. We don’t know how to put people away when we get an opportunity. It’s going to be a little while to keep working at that. We give a solid good work effort for 48 minutes, but we’re still not playing the game right. A lot of inconsistencies. We’re just young and we’re growing up, and it is painful to watch sometimes.”

Week 4: Jesuit will open district play — and simultaneously stage their Homecoming game — against St. Augustine on Friday, Sept. 25. Kickoff is at 7 p.m. at Tad Gormley Stadium. Advance sale tickets cost $6 and are available this week at Jesuit’s switchboard between 8 a.m. and 4 p.m.