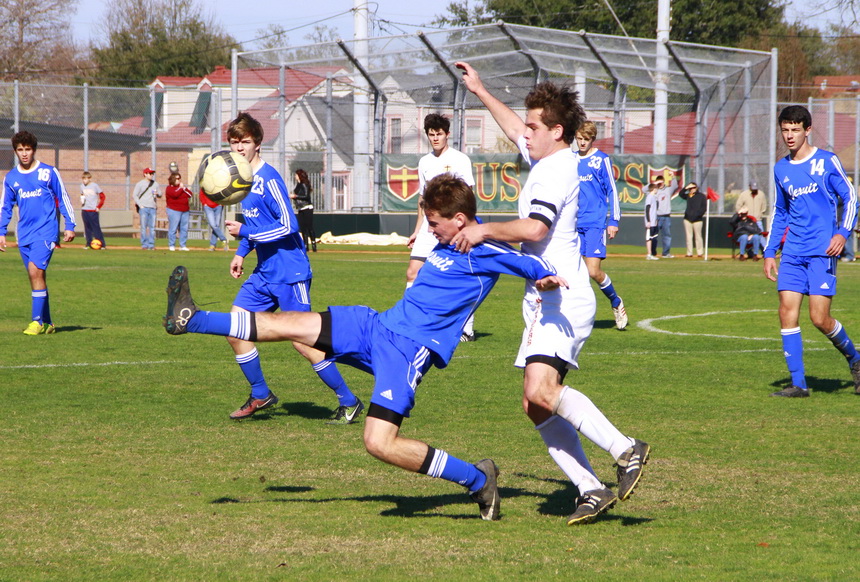 Braden Brignac puts himself between the ball and a Crusader defender.

The one-two punch duo of Chase Rushing and Dillon Fuchs knocked out Brother Martin, 2-1, and earned the Blue Jays a district (9-5A) championship.

For his role in Jesuit’s win, Rushing was named “New Orleans area Large Schools Male Athlete of the Week.”

The Saturday afternoon match under blue skies on the Crusaders’ Farley Field was even more physical for both teams than their first meeting earlier this month at John Ryan Stadium. That first match between the two rivals ended in a 1-1 tie when the Crusaders kicked a goal after catching the Jays napping with five minutes remaining on the clock. 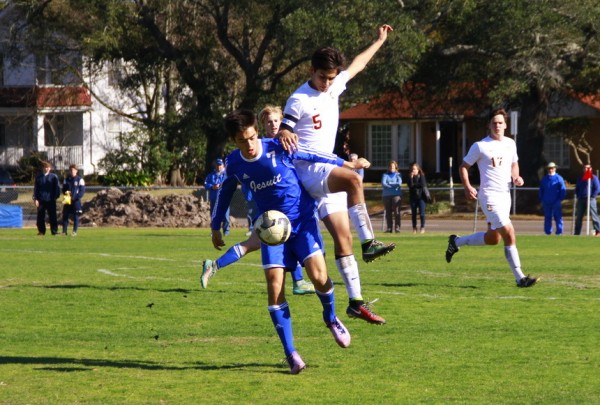 Chase Rushing battles for control of the ball.

No nap the second time around.

In the 40th minute, with the referee about to signal the end of the first half, Chase Rushing found himself in the middle of dense traffic piled up in front the Crusaders’ goal. But Rushing specializes in finding openings the size of blood vessels. He sent a powerful left foot kick that flew past the Crusaders’ goalie to give the Jays a 1-0 halftime lead.

Sixteen minutes into the second half, the Jays had a pair of back-to-back corner kicks. On the second corner kick, Patrick LaCour lofted the ball to the gang waiting in front the goal. Fuchs stuck his head right on the ball and sent it careening past the Brother Martin goalkeeper and into the right side of the net. Fuchs’s goal put the Jays two-up and fired up the 100 or so Jesuit soccer fans.

Strangely, the second goal had the opposite effect on the Blue Jays on the field. Instead of turning up the intensity level a couple of notches, the Jays uncharacteristically sat back on their haunches. Five minutes later, in the 61st minute, the Crusaders struck back with a goal that narrowed the gap to 2-1.

But then that old mystical Jesuit resilience kicked in. The Jays kept their composure, denied the Crusaders further opportunities, and the boys in blue and white finished strong, with dashes of gusto.

The Jays have three non-district matches ahead to keep them sharp and focused until the playoffs begin. Jesuit’s overall record improved to 15-4-3 (in-state 15-0-3; district 7-0-1). The first of those three matches remaining has the Jays and the Irish of Grace King playing on Wednesday, Jan. 28 at John Ryan Stadium. The match kicks off at 5 p.m.

Congratulations to the varsity soccer Jays on winning the District 9-5A Championship!