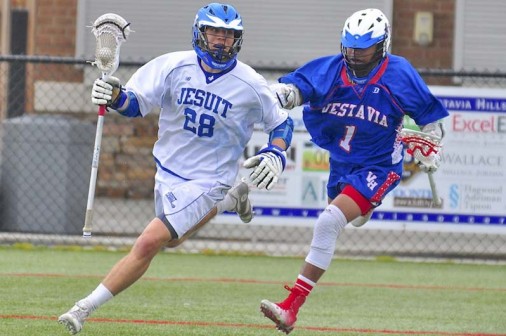 Senior Garrett Perez does his best to break away from a chasing defender during a weekend tournament in Birmingham, Alabama. The Jays finished 1-2.

The Blue Jay lacrosse squad returned from a weekend tournament in Birmingham, Ala. with just a single victory. However, head coach Steve Krobert ’05 knows that facing stiffer competition will make his team better down the line.

Sophomore Noah Martin had five goals in the team’s opening win over Oak Mountain on Saturday, March 14. Junior Max Murret added four goals and Garrett Perez had three in the 17-12 victory. Goalie Rob Hinyub, who played the entire game, tallied seven saves. The team’s leading goal scorer, senior Cameron Guernsey was hit hard after scoring on a behind-the-back shot. He did not play the rest of the weekend.

Jesuit lost their second game in triple overtime. Vestavia Hills beat the Jays 8-7. Murret had three goals in that contest, while Martin and junior Josh Cvitanovich had one apiece. Hinyub chalked up eight saves in the valiant, but losing effort.