Jays Face Eagles in Opening Round of Division 1 Playoffs

Jesuit and Shaw Kick Off at Tad Gormley Stadium on Saturday, Nov. 14, at 6 PM 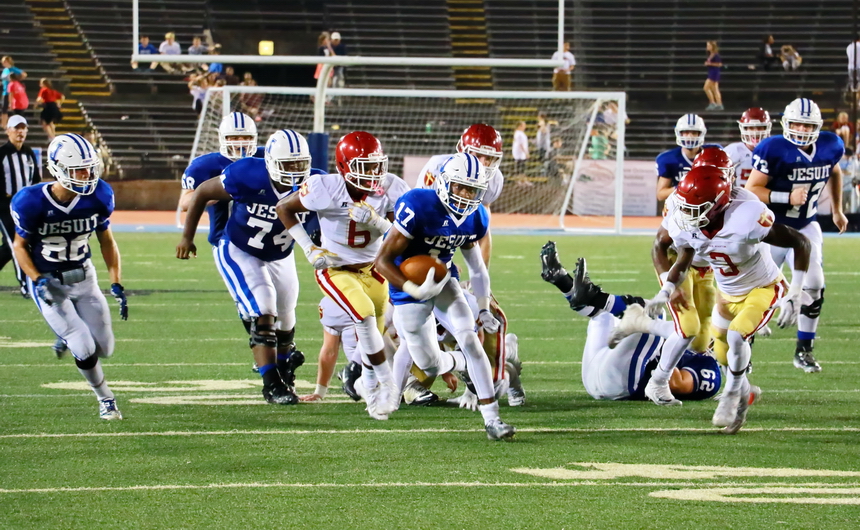 Five seconds remain on the clock in the Jesuit – Brother Martin game last week when Peter Hontas throws to Kalija Lipscomb, who incredibly, gets loose in the Crusaders’ secondary.

View the Photo Gallery of the Jesuit – Brother Martin Game

The opening round of the Division 1 playoffs begins this weekend with Jesuit hosting Archbishop Shaw on Saturday, Nov. 14, at Tad Gormley Stadium. Kickoff is at 6 p.m.

Pre-sale tickets are $6 for adults, students, and children (ages 6-11).  Pre-sale tickets will be on sale at the Jesuit switchboard on Friday from 8 a.m – 4 p.m. Students can also purchase tickets on Friday during lunch in the Student Commons. All tickets purchased at the gate are $8 each. Student IDs and season passes will not be accepted at the gate. 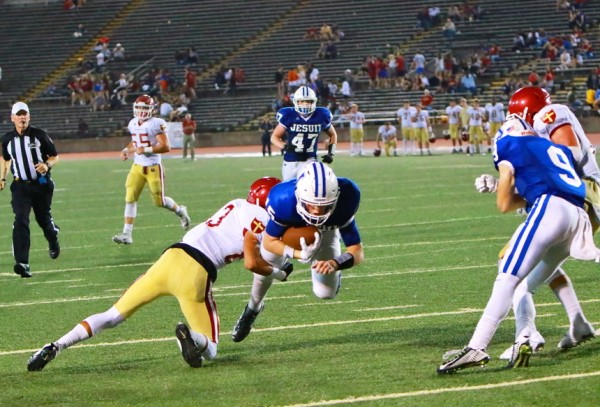 Quarterback Peter Hontas runs for a first down on this play in the Brother Martin game. He completed 35 of 49 passes for 469 yards and four touchdowns, his best passing game so far this season. He threw to seven different receivers.

A radio broadcast of the game can be heard locally by tuning into WGSO-990AM. Can’t tune in to WGSO Radio? Then watch and listen to a live stream of the game on SportsNola.com. The video stream will feature only one camera, but the audio portion will be the WGSO Radio broadcast. Handling the play-by-play action will be Jesuit alumnus Danny Riehm ’00 who will be joined by Nick Nolfe in the broadcast booth high above Gormley. Nolfe is a science teacher and an assistant football and baseball coach. Fans of Blue Jay football might remember that Riehm and Nolfe teamed up to call the exciting 2014 state championship game Jesuit and Curtis played in the Mercedes-Benz Superdome.

In Week 8 of the season, Jesuit defeated Shaw, 42-14, at Hoss Memtsas Stadium for its sole district win of the regular season. The Blue Jays, seeded eighth in the Division 1 bracket, should not expect to enjoy another cakewalk over the ninth-seeded Eagles. It’s the playoffs, after all. The winner will face the top-seeded Rummel Raiders the following week. 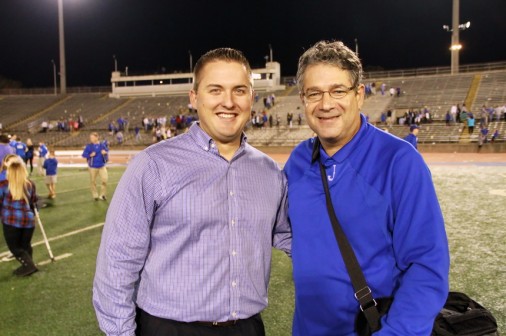 Jesuit’s broadcast team of Danny Riehm ’00 and Nick Nolfe are ready to call the plays when the Blue Jays host Shaw in the opening round of the Division 1 playoffs at Tad Gormley Stadium on Saturday. Kickoff is at 6 p.m.

The Jays are 4-6 overall and 1-5 in District 9-5A and come into the playoffs after sustaining a tough loss, 49-46, to Brother Martin in the final week of regular season play. Prior to the Crusaders, the Jays had defeated Shaw and a very good Franklinton team, 19-16. The Eagles are also 4-6 overall and 1-5 in district. Shaw’s only district win was in Week 6 at the expense of St. Augustine, 42-39.

The only other opening round game for Division 1 teams features St. Augustine and Holy Cross dueling on Friday evening, Nov. 13, at Tad Gormley Stadium. The winner will play the number two seed, Evangel Christian Academy, which along with five other Division 1 teams, has a bye in the opening round.