Jays Down Eagles, 7-2, to Remain in the Hunt for District Championship 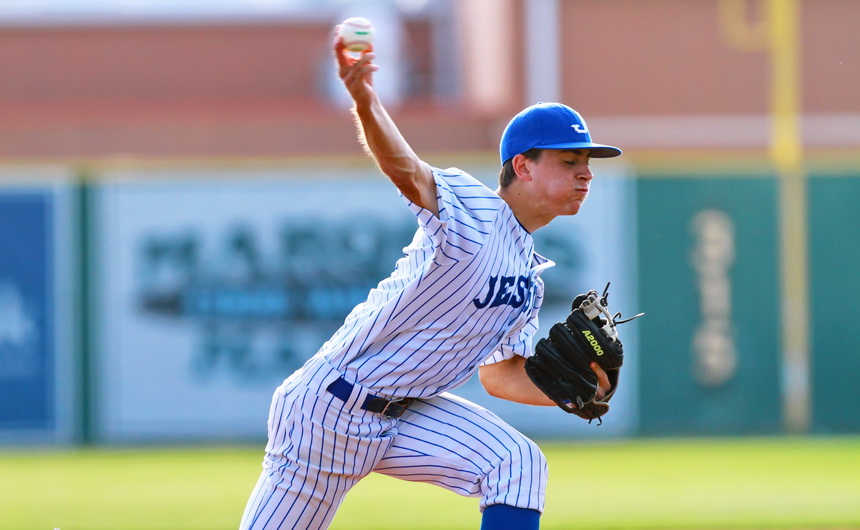 Brandon Briuglio gave up two runs on five hits against Archbishop Shaw on Tuesday afternoon at the Eagles’ Field. He struck out six batters (sometimes even with his eyes closed) to earn his third win of the season against two losses. Briuglio also helped his own cause by hitting two singles and a double.

He pitched five good innings and struck out six batters. He was the only Blue Jay who had three hits, including an RBI double. And when he came off the mound, he didn’t retreat to the dugout for Doc to ice his throwing arm. Instead, this junior Blue Jay took up his regular position at second base for the final two innings.

Brandon Briuglio did it all against Archbishop Shaw on Tuesday afternoon at the Eagles’ Field on the West Bank. He made them pay whether he was on the mound or wielding a hot bat. The right-hander held the Eagles to two runs on five hits. “Brigs” helped his own cause by singling twice at his first two at-bats. Then for his third appearance at the plate, he hammered a ball that hopped once before hitting the center field wall, good for a double that drove in a run.

The last game Briuglio started on the mound was against Hahnville in the Oubre Tournament and he threw a complete game shutout. Coach Joey Latino almost sent someone else to the mound against Shaw, but at the last minute decided to go with his junior second baseman instead. The decision was fortuitous. 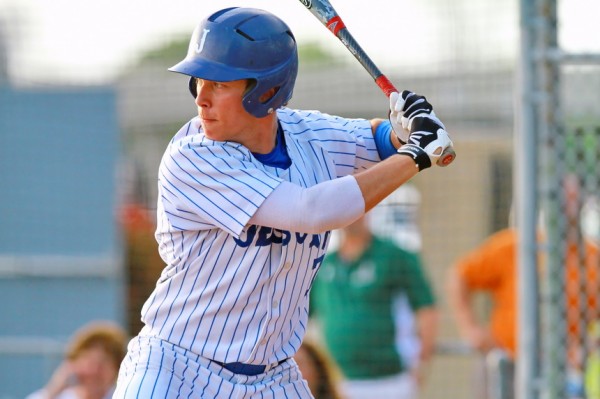 Scott Crabtree waits for the pitch that he will blast over the Eagles’ right field wall on Tuesday afternoon. Crabtree’s solo home run against Shaw in the sixth inning was the “icing on the cake,” according to Coach Joey Latino. It was Crabtree’s third home run of the season.

“He’s so valuable to us as a second baseman, I sometimes forget what he can bring us on the mound,” said Coach Latino. “He can just pound the strike zone. Briuglio is really a two-pitch pitcher, but he keeps everything low, he locates fairly well, and if the defense plays behind him, he gives us a chance to win.”

And win the Jays did, taking home a 7-2 victory at the Eagles’ expense to improve their overall record to 18-7 and their district record to 3-2, which also happens to be Briuglio’s pitching record. Senior Logan Hornung relieved Briuglio and pitched the final two innings, giving up two hits, one run, and striking out two batters. Hornung, who on Saturday pitched four steady and final innings in the Jays’ loss to Holy Cross, earned a save.

The Jays return to John Ryan Stadium on Friday afternoon, April 10, to start second round district play. Jesuit will host St. Augustine with the first pitch at 5 p.m.

“The way our league is going,” observed Coach Latino, “up is down and down is up. I told the team 3-2 is not ideal but you keep yourself in the neighborhood. We still have a full round to play and anything can happen. For us — outside of the district component of the way things are going right now — we’re just trying to be more consistent.

“I was happy with everything we did today,” he continued. “Pitching, I thought Brandon Briuglio gave us a great effort, Logan Hornung came in and did a good job. Offensively, I thought we were very good against a very good pitcher. We need to build on that. That’s been our problem in the last few weeks. It’s been a little inconsistency, and now we find some consistency.” 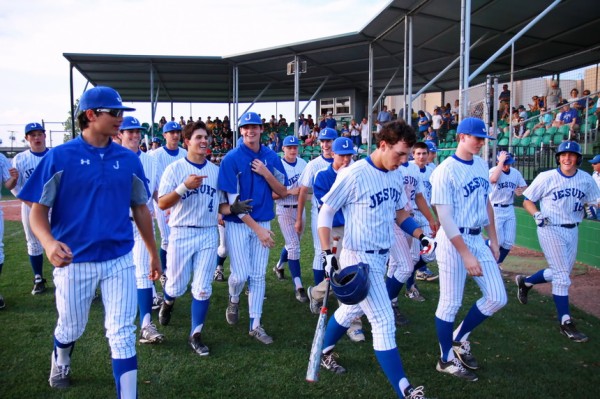 With bat and helmet in hand, Scott Crabtree leads the Blue Jays back to the dugout, which he emptied after blasting a solo home run against Shaw on Tuesday afternoon. Crabtree’s homer was “the icing on the cake,” according to Coach Joey Latino.

There were several Jays who came through with some big hits. Scott Crabtree hit a single in one of his early at-bats, then crushed a solo home run over the right field wall. It was the proverbial “icing on the cake” and his third homer of the season.

Hayden Fuentes, who played third base, had a big single that drove in two runs. At the time the Jays were ahead, 3-1, but Fuentes’s two RBIs extended the lead to 5-1.

“That was huge,” said Coach Latino. “You’re sitting on a two-run lead in this ball park with the hitters they have in that lineup, that’s a little dicey. You extend it to four runs and it gives us a little more cushion, a little more comfort.”

Right fielder Ben Hess hit two singles and Harrison Daste hit a hard grounder at the Eagles’ third baseman who couldn’t handle it. So Daste ends up on second base.

The competition to win district remains an intense battle and it is still up for grabs.

“Rummel and Holy Cross are leading and that’s the way it is,” said Coach Latino, noting that it’s not what people predicted. “But predictions are out the window at this point. All you can do is keep playing, game in and game out, just give it your best effort. The good thing is we still have to play everybody again and teams are going to keep knocking each other off… There’s about as much parity in this league as there has been for a long time. It’s making for a fun league, it’s making for an exciting league.”

Nola.com: UNO commit Scott Crabtree of Jesuit: ‘We’re trying to do our job out here’ | Video