Jays Battle to the Wire, but Come Up Short Against Brother Martin 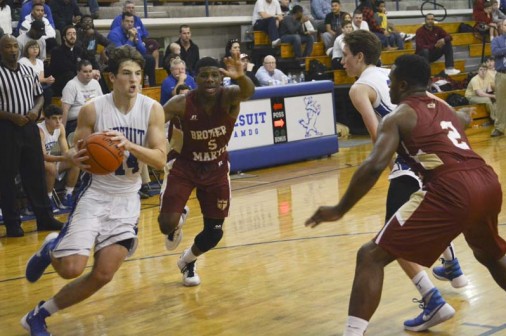 Senior Rob Weiss takes a perfect pass from junior Scott Beebe on a back door cut against Brother Martin on Saturday, Dec. 5. Weiss scored 25 points on the night, while set-up man Beebe dished out a team high five assists.

Jesuit’s basketball team hung tough with a deep and talented Brother Martin squad on Saturday night in an Allstate Sugar Bowl CYO Tournament consolation bracket game, but the Crusaders sank key free throws down the stretch to hang on for a 57-52 victory.

Senior Rob Weiss had a monster game for the Jays, pouring in 25 points and collecting nine rebounds, both team highs. Weiss was 9-15 from the field (4-8 from beyond the three-point arc). Junior Sam Ovella added 11 points, while junior Chris Beebe dished out five assists.

The loss drops Jesuit to 2-4 for the season. Next up for the Jays is a first round match-up with Helen Cox in the Newman Invitational Tournament on Wednesday, Dec. 9.