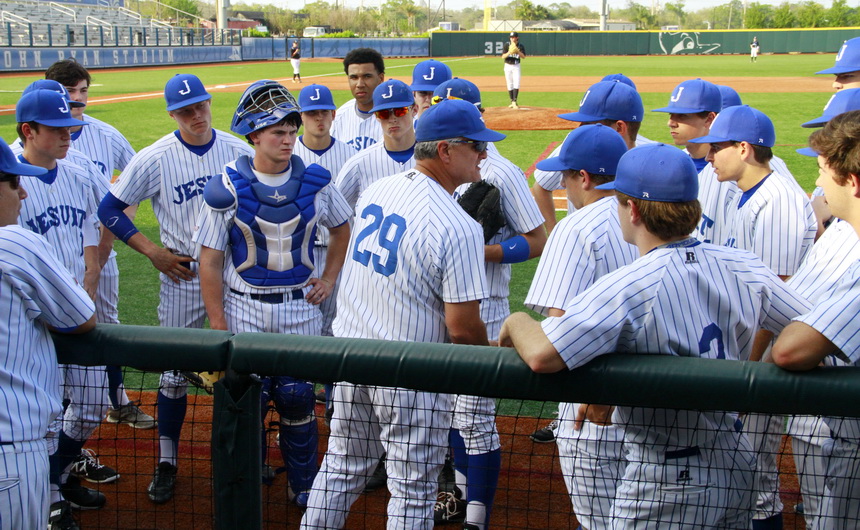 Everybody seems to be gunning for the Blue Jays as the team to beat in District 9-5A. So what’s new?

The fact is that Jesuit is one of six teams in the district and any one can beat their opponent on any given night. The other five teams that comprise District 9-5A are Archbishop Rummel, Archbishop Shaw, Brother Martin, Holy Cross, and of course, St. Aug, a team which has won half their games thus far.

The Jays are coming off a strong performance in the prestigious Gerard Oubre Memorial Tournament, winning 3 of their 4 games against solid teams like Assumption, John Curtis, and Hahnville. The Jays’ single loss in that tourney was a 7-1 drubbing by Zachary.

“We’ve been playing pretty consistent baseball,” says Coach Joey Latino. “There were a couple of games where we came out and played flat, but overall we have been consistent. Against Zachary, we were bad.”

But Coach Latino told his troops after the game to “flush” Zachary – the first of a double header last Saturday – and the Jays came back against John Curtis, a very good team in the second game. Down 4-3 going into the final inning, the Jays scored two runs to pull out a 5-4 win over the Patriots. 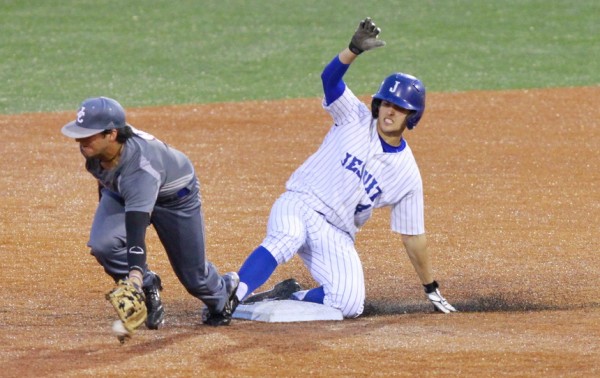 Alex Galy hits an RBI double against John Curtis. Galy is the team’s top hitter with a .452 average and 25 runs scored.

In the final game of the tournament on Sunday (March 22), the Jays went up the river to shutout Hahnville, 4-0, the second time this season Jesuit has whipped the Tigers.

The Jays will be doing their best to try to add to their 15 wins as the 2015 district season begins. Jesuit plays each opponent twice.

Jesuit’s pre-district schedule did not allow Coach Latino or his assistants – Kenny Goodlet and Nick Nolfe – any opportunity to “scout” the opposition. That’s a luxury the Jays, even the opposition, cannot afford.

“All the teams are strong,” says Coach Latino, who is in his fifth year as head coach. “We’re playing games, practicing, playing in tournaments, it’s hard to get a pair of eyes on the other teams.”

In his first four years, Coach Latino has fielded powerful but different Jesuit baseball teams. In 2011, his first year, the Jays won district and state. The next year, they were repeat district champions. The last two years, the Jays had to settle for district runner-up honors. And last year, those second place district Jays ended up in the final four at the state tournament, although they lost in their quarterfinal game. 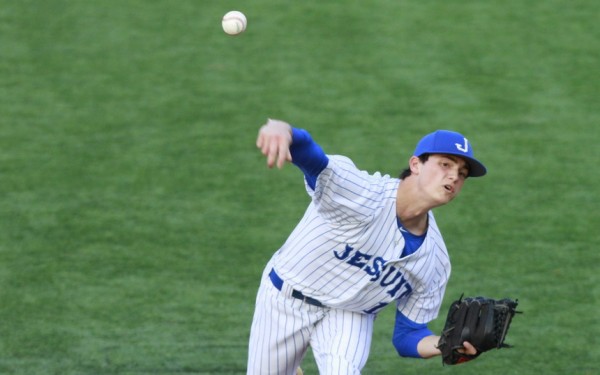 Jack Burk has emerged as the Blue Jays’ ace, throwing a strong fast ball and a wicked curve.

What the Jays have going for them in the 2015 season year is an abundance of talent, depth, consistency, and Blue Jay Spirit on offense and defense. Again, what’s new?

The Jays are hitting the ball well with seniors Alex Galy (SS) leading the team with a .452 batting average and Scott Crabtree (LF) producing 21 RBIs. But Coach Latino also mentions that his usual lineup has stellar stars in seniors Ben Hess (RF), Trent Forshag (C), Dan Edmund (1B), and Harrison Daste (CF), and junior Brandon Briuglio (2B), who can also climb the mound when called upon.

“We have a lot of depth pitching,” observes Coach Latino, adding that senior Jack Burk “is obviously our ace, but we have any number of other kids who can come in and do well.”

Coach Latino won’t make the decision as to who will start against the Purple Knights until shortly before game time. It could be one of the seniors, either Myles Blunt (who has also demonstrated that as the designated hitter, he can reach base) or Logan Hornung; or one of the juniors – Sean Bretz or Mason Mayfield; then again, sophomore Davis Martin threw a no-hitter earlier this season.

“It’s not about who you are playing, but what you’re playing for,” Coach Latino points out. “This is district. Obviously one of our goals is to try and win the district championship, so every game is important.”