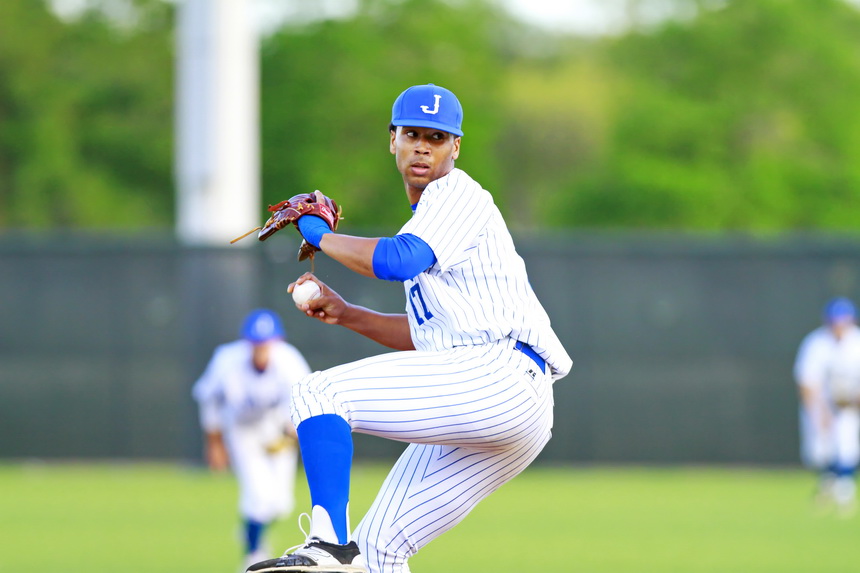 Myles Blunt turned in a stellar performance on the mound in the Jays’ opening district game against St. Augustine.

After a couple of innings of tentative, polite baseball for Jesuit and St. Augustine at their district season opener Wednesday, the guests — that would be the Blue Jays — went ballistic on the home team, the Purple Knights.

The Jays exploded for six runs in the 4th inning and another eight runs in the 6th inning. When the turf pellets at RBI Field (formerly Wesley Barrow Stadium) settled back down, the Jays emerged with a 16-0 win, a shutout no less, against a Purple Knights team that offered a little resistance in the first two innings before the wheels fell off and the chariot plunged over the cliff.

“Anytime you’re putting up goose eggs, that’s pretty good,” said Coach Joey Latino. “It’s hard to lose when you’re not giving up any runs. But it does speak to our (pitching) depth. We have five or six guys that can go out there and put up consistent innings, and another two or three that are still developing. We feel really good about where they are at this point.” 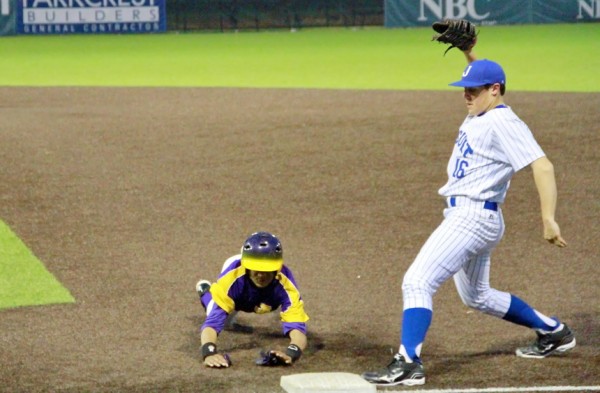 Dan Edmund makes a smart and quick double play on his own when he snags a soft line drive and deftly steps on first base before the St. Aug runner can return. End of inning.

The Jays had only 7 hits but crossed the plate 16 times. In the eternal 6th inning, the Purple Knights twice loaded the bases with Blue Jays, who proceeded to walk home, one after another. While St. Aug’s pitching collapsed, the defense was imploding. Fly balls fair and foul were inexplicably dropped and infield grounders were juggled and muffed. Blue Jay batters who couldn’t find something to hit or did not draw four balls for a walk were probably hit by a pitch. Four Blue Jays were hit by pitches in the 6th inning, including junior Hayden Fuentes (3B) who was smacked twice.

“We’re not scoreboard watchers,” said Coach Latino. “We want to play the game hard from first pitch to last, out to out, inning to inning. I think we’re doing a pretty good job of that. You saw some guys come off the bench and have some pretty good at-bats and it speaks to the depth of our ball club. All these guys go out, day in and day out, and work hard. You’re seeing the benefits of their hard work.”

On the opposite end of the wild pitching spectrum was a calm oasis emitted by Jesuit senior Myles Blunt, a right-hander who gave up just 4 hits, struck out nine batters, and went the distance of six innings to earn his 4th win against a single loss earlier in the season.

“I just threw strikes and our defense made plays behind me and that’s all I can ask them to do,” said Blunt, adding that as the Jays’ offense came alive, the pressure went south. “It helps you feel relaxed and not stress out about giving up runs. I feel like we’re good but we can always be better. We just have to continue working.”

Coach Latino had nothing but praise for his big pitcher who likes to throw curves and fast balls.

“You always want to start with a win and it’s nice to see Myles come out and have the outing that he had,” he said. “He’s been consistent all year and that’s been the key for him. I thought he did a great job. And once we got the big push in the 3rd and 4th innings, he just settled in. I reminded him to just go out there like it’s nothing-nothing; just keep pitching your game and he did an excellent job of doing that.”

The game against St. Aug ended, mercifully, one inning early because of the 10-run rule in prep baseball.

The Jays (16-4; 1-0) anticipate much sharper competition when they host Archbishop Rummel on Friday, March 27 at John Ryan Stadium. First pitch is 4:30 p.m. Students from Jesuit and Rummel with their school ID cards are admitted free, as are faculty and staff. Season passes will be honored. Admission for adults is $6.