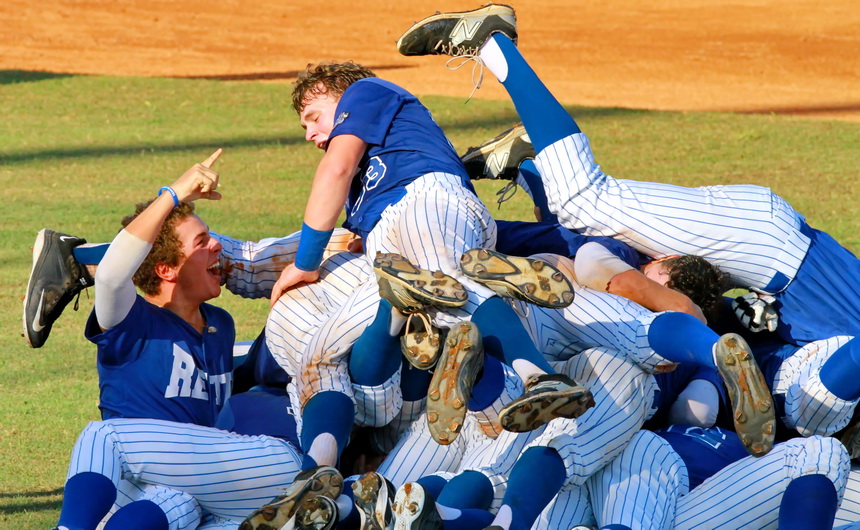 The Oilers pile on after Trent Forshag scores the winning run on a hit by Scott Crabtree in the bottom of the ninth inning.

Bulletin: The Retif Oilers will face the New Orleans Boosters in a pair of games on Thursday, July 30, and Friday, July 31, at Kirsch-Rooney Stadium with first pitch for both games at 6 p.m.  The team will use these games as part of the final preps for the American Legion Mid-South Regional Tournament, scheduled August 5-9 in Conway, Arkansas. The Oilers will open Mid-South tourney play against the Kansas state champion on Wednesday, August 5, with first pitch set for 1 p.m.

The Retif Oilers needed most of their 17 runs scored against the River Ridge Patriots (John Curtis) in Tuesday’s midnight marathon at the American Legion State Tournament.

Sixteen hours later, it was a different story for Wednesday afternoon’s game between Retif and the Delhomme Drillers.

In the opening game last Sunday of the double elimination tournament at Kirsch-Rooney Stadium, the Lafayette-based team of Acadiana High School lost to Retif, 6-2. The Oilers went on to win their next two games, rallying from a 4-2 deficit in the top of the ninth to defeat Gauthier-Amedee, 6-4, then beating the Patriots, 17-14, to set up a second encounter against Delhomme. 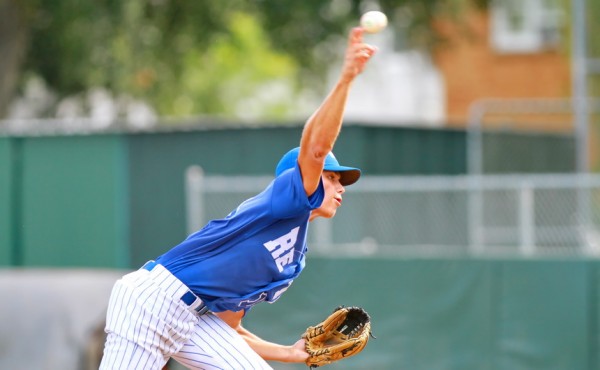 Mason Mayfield needed only 75 pitches to shut out the Delhomme Drillers and help lead the Retif Oilers to the American Legion State Championship.

“We were gassed a little bit and Delhomme was, too,” said Coach Joey Latino. “This has been a long tournament. Every game has been tough, every game is a struggle.”

As he did in that first game, Coach Latino once again chose right-hander Mason Mayfield to start against the Drillers. Mayfield gave up three hits in the first inning but not his composure. He settled in quickly and tightened the screws on the Drillers, allowing only two additional hits for a total of five. Mayfield struck out five batters and walked not a single batter.

Meanwhile, Delhomme’s pitcher kept the Oilers hitless until the fourth inning when Ben Hess singled but was left stranded. The Oilers had six hits, one more than Delhomme.

“You have to tip your hat to both pitchers, two outstanding pitchers,” said Coach Latino. I hate to use the cliché, but on a day like today, it’s a shame someone had to lose. Both teams are deserving of the win, both teams played their hearts out, and I can’t commend (Delhomme) Coach (Donnie) Boutin and his players enough for the job they did.”

The game remained scoreless through eight and a half innings. In the bottom of the eighth inning, Stephen Sepcich hit a double, but was picked off by a rocket thrown by the Drillers’ catcher.

“I thought we might have squandered our last opportunity cause that kid was taking it to us,” said Coach Latino, referring to Delhomme’s pitcher. “We were not going to get a whole lot of opportunities, but thankfully, we got another chance in the ninth.”

For Oiler fans, the bottom of the ninth inning was as exhilarating as a Zephyr ride after a dozen raw oysters. After Hess reached first base on an error, Forshag stepped to the plate and Coach Latino called a hit and run. The Oilers’ catcher smacked a fly ball deep to left field. Hess rounded second base and one couldn’t blame him for momentarily hesitating to make sure the ball was not caught (the outfielder almost caught it). Hess, one of the fastest base runners on the team, was waved home. But the Drillers executed two perfect relay throws and the catcher had time to read a comic strip before tagging Hess out at the plate. 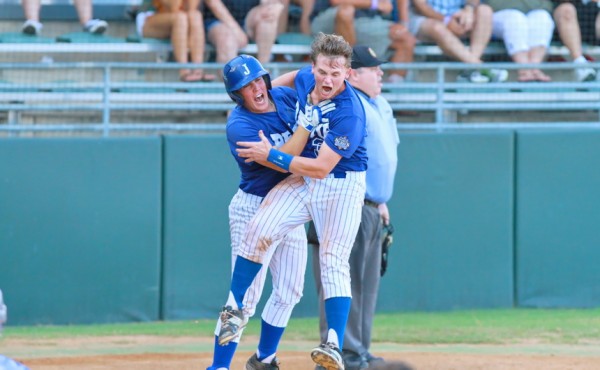 Dan Edmund and Trent Forshag react after Forshag scores Retif’s lone run in the bottom of the ninth inning.

“I really thought Ben was going to score,” said Latino. “We actually had a hit and run on the move. Delhomme just made a great relay throw to the plate to get us. All the wind is out of your sails for the moment…”

Meanwhile, Forshag ended up with a two-bagger and Scott Crabtree is the batter. Hitless in his last six at-bats, Crabtree connected on a fast ball away, sending it to the gap in left-center field and easily scoring Forshag. End of game.

“Scott comes up and gets a good pitch to hit in the gap and the best thing about that run scored in the end is it involved two seniors — Trent Forshag scoring and Scott Crabtree hitting it,” said Coach Latino. “Nothing could be more fitting.”

After the players undid the dog pile, Coach Latino told his players that they got the job done and “we have a lot to be thankful for” as the next step unfolds: the American Legion’s Mid-South Regional Tournament that begins August 5 at Hendrix College in Conway, Arkansas. That tourney will bring together Retif and the champions from seven other states.

“This is a great group of kids, and it starts with our seniors, who have tremendous character,” said Coach Latino. “They give everything they have to Jesuit baseball all summer and they’ve already graduated. They decided to hang around and make this last summer very special and they’ve done that… The question for this team is how is our pitching going to hold up. Every time you get up in a tournament in Arkansas, anything could happen. You never know, you might have a spot in Shelby,” (N.C., the site of the Legion’s annual world Series, which Retif won in 2012). 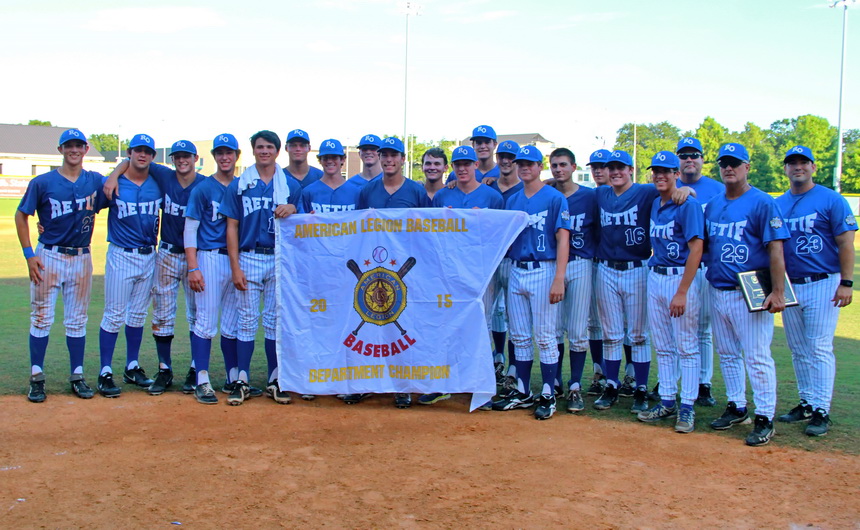 The 2015 American Legion State Champions for the second year in a row: the Retif Oilers.