Jays Leave It All on the Field in Double OT, Skinned by the Tigers in a Rivalry Nail-biter, 28-21 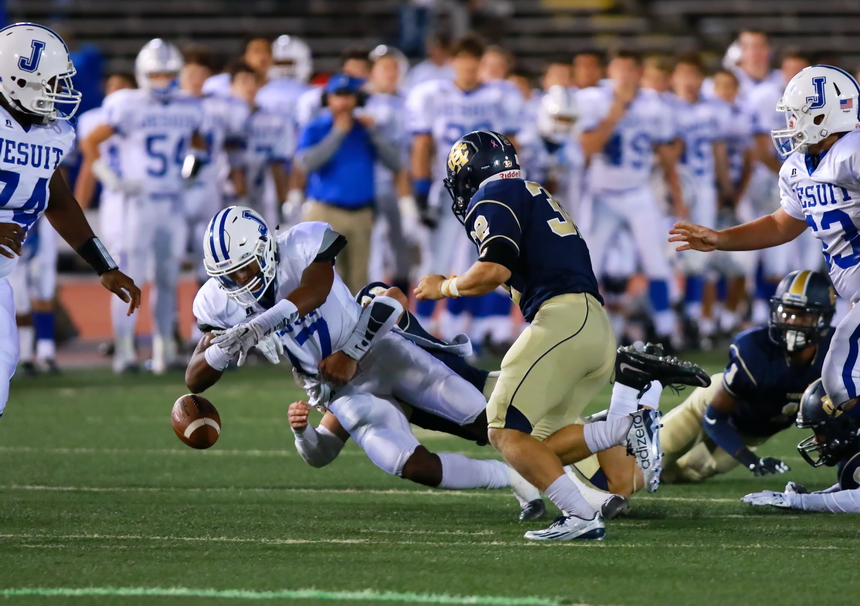 Kalija Lipscomb fumbles on the first series, and it’s recovered by the Tigers, ending a promising drive by the Jays.

When it was all said and done between Jesuit and Holy Cross on Friday night (Oct. 2) , the 96th meeting between this pair of crosstown Catholic rivals — truly two Great American rivals — would be etched into memories and history books as one of the most exciting football games played at Tad Gormley Stadium.

That one team had to take home a bitter loss, well that’s prep football, and a slice of life. Unfortunately for the Jays, the outcome of Friday night’s nail-biter was perhaps more gut-wrenching for Jesuit than the Tigers’ lopsided 56-14 loss in last season’s Rivalry game.

The defending state champion Blue Jays are 2-3 overall after Week 5, and a dismal 0-2 in the Catholic League following their stunning double overtime loss to Holy Cross, 28-21, in this year’s Rivalry game, coupled with the unexpected defeat, 26-20, by St. Augustine in Week 4. 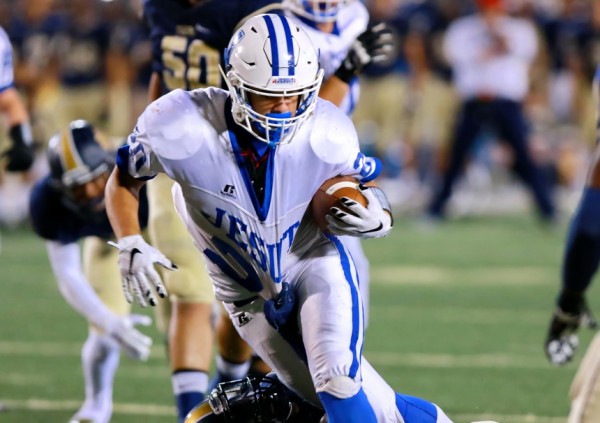 It’s a little bit of a miracle that among the estimated 12,000 fans in the stadium, many of whom were parents, grandparents, and alumni, no one suffered a heart attack. But there are plenty of sore throats. The game was televised live on WHNO (Cox Channel 20/1020) with Ken Berthelot and former Jesuit head coach Wayde Keiser calling the action, much of it breathlessly over a three-hour span.

“We had all sorts of opportunities, but we kept shooting ourselves in the foot,” said one astute observer on Jesuit’s sideline. “We just made too many mistakes. I really feel bad for our players. They played their hearts out and left them on the field.” 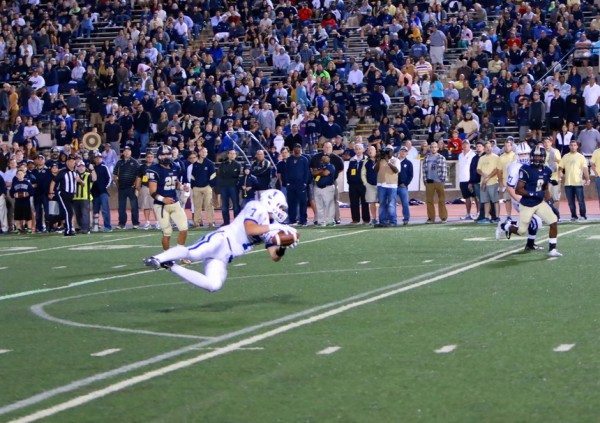 With the score tied at 14-14, the Jays move the ball into Tiger territory. On third and six, Hontas connects with Zach Young for a huge first down at the Tigers’ 29-yard line.

In overtime, the ball is placed on the 10-yard line and each team has four downs to score. Prouet scored on Jesuit’s first possession and Jacobs kicked the PAT. Jesuit led 21-14. Holy Cross now had its chance and could do nothing on the first three downs. Facing fourth and 11, the Tiger quarterback rolls right and looks in the end zone. Jesuit defensive back Matt McMahon blitzes and gets an arm around the Tiger QB, who slips out of the jam. He tosses the ball… and it’s caught in the far reach of the end zone. With the PAT, the score is 21-21.

The teams go into double overtime with the Tigers on offense first. On first down, another pass into the end zone is caught for a TD. The PAT is good and Holy Cross is out front, 28-21. Jesuit has four downs to tie it. The Jays rely on Prouet, who battles to get the Jays down to the three-yard line. But it’s fourth down. The Jays have one last shot. Prouet takes the hand-off from Hontas and there is daylight on the left side. Hontas jumps up and must have felt that Prouet would score easily. But daylight quickly turns to darkness as the Tigers’ defense swarms Prouet at the one-yard line. He is shoved back to the five or six yard line. As Berthelot puts it: “In a rugby scrum, Connor Prouet is stuffed.”