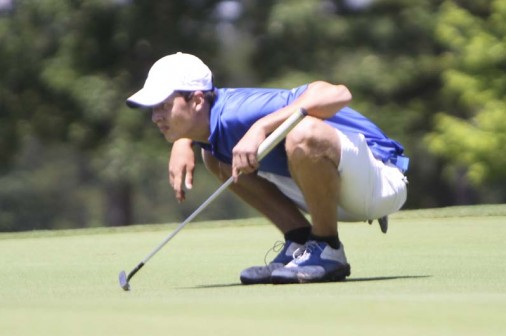 Junior Grant Glorioso gets in the zone on his way to an outstanding round of 70 at the District I – Region II Golf Tournament at Carter Plantation in Springfield. The eight-team event took place on Wednesday, April 29.

Junior Grant Glorioso shot a two-under par, 70, to lead the Jesuit golf team to a first place finish at the Division I – Region II Tournament. The victory means the Blue Jays advance to next week’s state tournament.

The eight-team regional event took place on Wednesday, April 29, under sunny skies at Carter Plantation in Springfield, which is just outside of Hammond. Golfers played from the gold tees, making the David Toms course play at 6,548 yards.

The Blue Jays finished with a team score of 305, just a single stroke better than Catholic’s 306. Also moving on to the state tournament are St. Paul’s (319) and Dutchtown (325).

The lowest individual score of the day, a 69, was posted by Dutchtown’s Logan Leary. Leary and Glorioso, who are friends on and off the course, played with Catholic’s Connor Wilson in the first group. Wilson — considered one of the state’s top golfers — shot a disappointing 79.

Junior Carlo Carino tallied a 3-over 75 for the Jays. Sophomore Nolan Lambert finished at 75. Sophomore Sean Donovan and freshman Grayson Glorioso both shot 83s. Only the team’s top four scores are counted toward the team total. The post-season alternate is freshman J.T. Holmes.

That’s two wins a row for the boys in blue and white. The Jays finished atop the leader board at the LHSAA Division I – District 4 Tournament on April 28, at Beau Chene, where they recorded a 321.

“When you consider that we knocked 16 strokes off of last week’s score, I feel good about our team’s chances to compete well as we head into championship week,” said head coach Owen Seiler ’75.

The LHSAA Division I Boys’ State Golf Tournament is scheduled for May 4 and 5, at the Farm D’Allie Golf Club in Carencro.