Faces in the Crowd at the American Legion World Series

Fans of Retif and Jesuit Baseball Come from All Over, Even Hong Kong 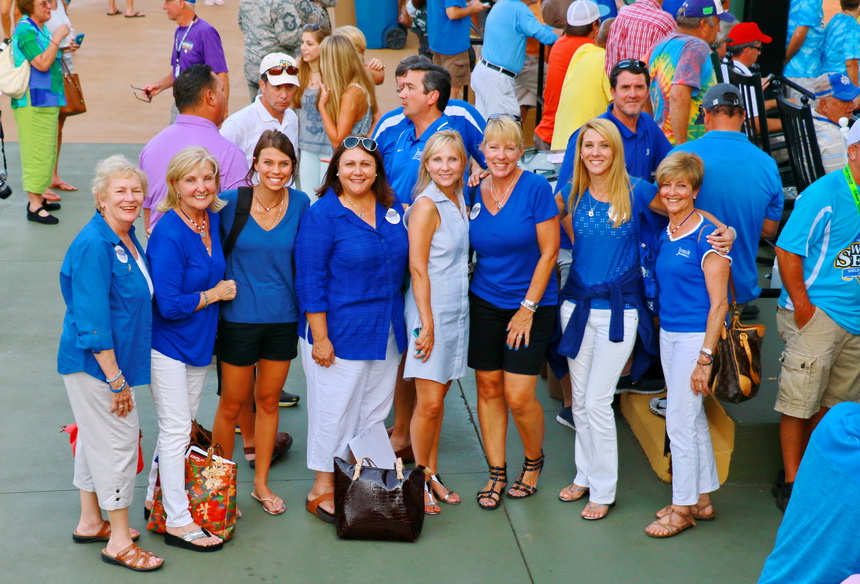 This group of mothers and grandmothers (with one notable exception) is among the most enthusiastic supporters of Jesuit and American Legion baseball. They rarely have missed watching their sons play ball. From left are Brenda Connolly, grandmother of Scott and Todd Crabtree and mother of Breni Crabtree ( third from right); Renee Melito, grandmother of Ben Hess and mother of Lorraine Hess (second from right); Julia Gerarve, girlfriend of Ben Hess; Rebecca Edmund, mother of Dan Edmund; Anne Beebe, mother of Mark Beebe; Breni Crabtree, and Lorraine Hess with her mother-in-law Tish Hess, who is the mother of Rob Hess ’85 (standing behind Lorraine).

Faces in the Crowd Photo Gallery

The American Legion World Series in Shelby, NC, has brought together fans, friends, and family in support of the Jesuit-based Retif Oilers in their quest to capture a second national title in the span of three years.

Of course, most of the team’s core group of supporters is from New Orleans and consists of the players’ parents, grandparents, siblings, classmates, and a girlfriend. Retif fans form a large enough contingent to take up an entire section of the grandstand at Hoyt S. Keeter Stadium, a magnificent baseball facility that is immaculately maintained by a small platoon of workers. The American Legion operates the stadium which is adjacent to Shelby High School. Each summer since 2011, scores of volunteers descend on Keeter Stadium for the World Series tournament. The nearly weeklong event draws about 100,000 visitors to Shelby and slaps the butter on the local economy’s bread. 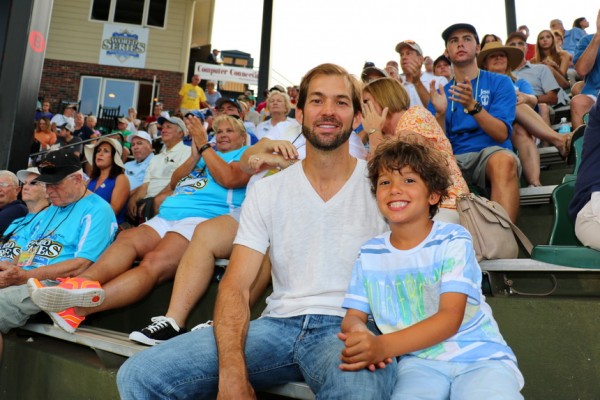 Eric Hanemann ’93 brought his son Liam to Saturday’s game at Keeter Stadium. Hanemann was visiting his parents in nearby Charlotte when he heard that the Retif Oilers were playing in the American Legion World Series in Shelby. (Read more about Eric Hanemann in the story that accompanies this photo gallery.)

Retif Oil is one of the more unique teams that is playing in this tournament because all of the players either are current students at Jesuit High School or just graduated in the Class of 2015. The rosters of the other seven teams at the tournament show players coming from two to six or seven different schools. People seem to be impressed by the fact that all of the Oilers are Blue Jays.

Retif fans have come to expect that occasionally there will be alumni sitting among them who have made special efforts to support Jesuit baseball and experience the American Legion’s tournament.

Eric Hanemann ’93 brought his eight-year-old son Liam all the way from Hong Kong to Saturday’s game against the South Carolina team that Retif plays again for the championship on Tuesday, Aug. 18. Well, actually, Eric, his wife Linda, their five-year-old daughter Ella, and Liam live in Hong Kong but had traveled back to the States for an extended visit with his parents , Jerri and Pete Hanemann ’53, who live in Charlotte. 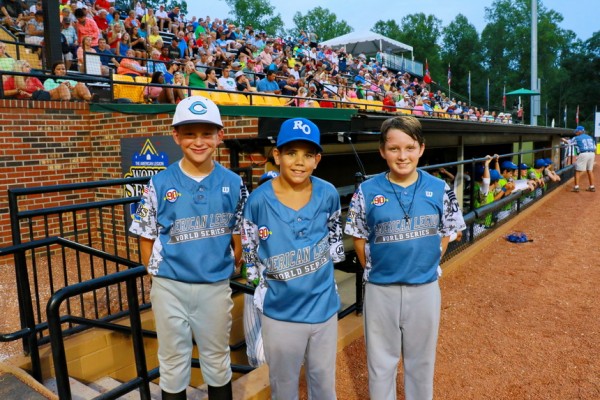 Boys and girls in the Shelby area can volunteer to serve at the American Legion World Series as batboys, batgirls, and shaggers (who chase foul balls and make deliveries to the home plate umpire. The youngsters are assigned by the American Legion to each of the eight teams in the tournament. Retif is lucky to have this trio of boys who have become ardent supporters of the team. From left are Carson Gillespie, a 7th grader at Cleveland Middle School, and Derek Acuff and Grady Ellis, 8th graders at Kings Mountain Elementary School.

When Eric found out that Retif was playing in the American Legion World Series, he drove the 45 minutes it takes to get to Shelby from Charlotte and easily found the Jesuit section in the grandstands. Hanemann is an airline pilot for Cathay Pacific and flies those jumbo 777s on “long hauls,” usually flights of about 12-16 hours that follow routes from New York to Singapore or Los Angeles, San Francisco, Toronto, or Vancouver to Hong Kong. Typically, Hanemann flies these Boeing jets with 340 passengers and a crew of 16, including cockpit personnel and flight attendants.

After graduation from Jesuit, he received a BA in classics in 1997 from Duke University, where he also earned his MBA in 2003. Hanemann served four years in the U.S. Marine Corps, from 1997-2001. During his stint with the Marines, his interest in flying started and after his discharge, he began devoting more time to his new hobby. Hanemann earned his private pilot license and in 2001, he upgraded to a commercial license that allowed him to fly small planes, including seaplanes, for aviation businesses on the West Bank and at Lakefront Airport.

In 2004, Eric and Linda were married. She taught French through CODAFIL, a program in Louisiana that promotes and educates people about the French language and culture. Hanemann continued to climb the ladder to the cockpits of bigger and bigger planes. For awhile he flew executives of The Shaw Group on the company’s corporate jet. Then he flew for SkyWest, a regional carrier. He joined Cathay Pacific about 10 years ago and the family makes their home in Hong Kong.

Hanemann attended his 10-year reunion in 2003, but the timing of subsequent alumni events conflicted with work and he was unable to join his classmates, several of whom all stay connected through various social media. He rarely visits New Orleans since his parents retired and moved to the Charlotte area. But Jesuit is still very much a part of him.

“We don’t have roots because pilots are always on the move,” he said during a one-hour lightning delay at the game, which was boring to Liam, who brought along a tablet that he quickly immersed himself in. “There’s one thing I’ve come to appreciate and that is that Jesuit is an anchor. It is an anchor for life because it combines with family to always tie you to a place, whether emotionally, physically, or metaphysically. That place is home.”