Despite Rain Delay, Retif Off to a Good Start at the American Legion’s Mid-South Regional Tournament 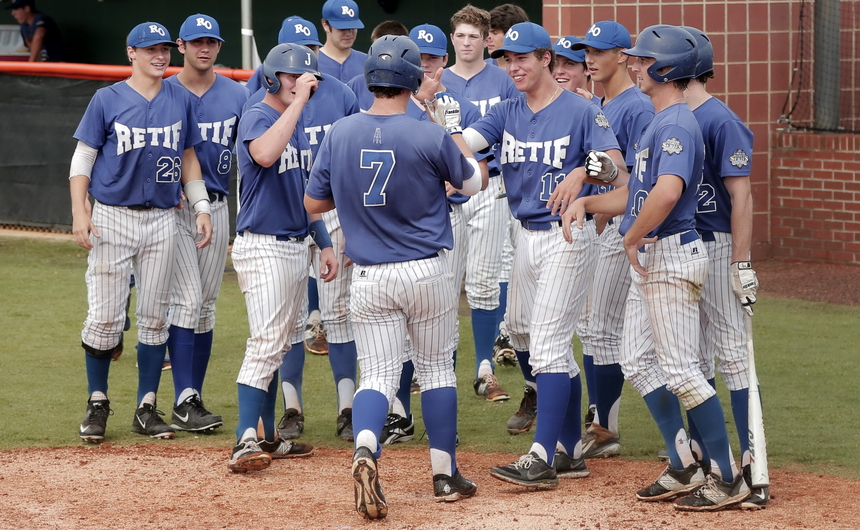 Scott Crabtree is greeted by his teammates after smashing a three-run home run in the top of the 6th inning with two outs. (Photos by Karen E. Segrave)

Scott Crabtree pelted a three-run homer and David Boh pitched six shutout innings as the Retif Oilers had their way with Ottowa, Kansas in Wednesday’s rain-delayed opening round of the American Legion Mid-South Regional Tournament.

Retif (27-6-1) won handily, 13-2, and will face the Mississippi champion from Tupelo on Thursday evening. The tournament is being held at Hendrix College in Conway, Arkansas. 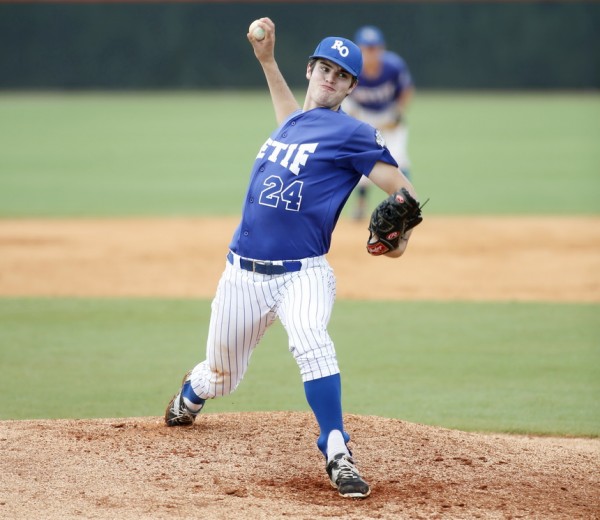 When play resumed, David Boh was sent to the mound in relief of starter Mason Mayfiield. Boh threw six innings of shutout ball.

With the Oilers leading 3-2 after three innings, severe thunderstorms moved through the area. Retif and Ottowa players worked together to cover the infield with a large tarp. Two and a half hours later, play resumed.

Mason Mayfield, who started for Retif and pitched three innings before the deluge arrived, was relieved by David Boh. The pitching change worked for Retif but not for Ottowa. The Oilers started pounding out hits while Boh shut out the Kansas team, allowing only one hit over the next six innings. Boh struck out four batters and walked two and with the win, improved his record to 4-0.

Crabtree’s home run in the sixth inning came with Trent Forshag and Ben Hess on board. Hess had four hits, including a double. Other big hitters for Retif were shortstop Nick Ray with two doubles and second baseman Brandon Briuglio with one double. Forshag, Stephen Sepcich (DH), and third baseman Connor Maginnis each singled. Maginnis, who also pitches, was sent to anchor third base after Hayden Fuentes injured his hand while sliding. Ray is playing shortstop in place of Alex Galy who could not make the trip because of illness.