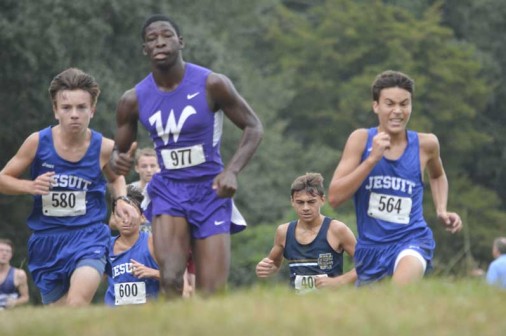 Juniors Luke Malter and Hayden Ricca take on the “hills” at the City Park course. Malter would make his move later in the race to finish third overall.

“Luke ran a really smart race,” said coach Rudy Horvath ’86. “His splits were pretty even. By not extending himself too early, he was able to make some moves as the race wore on.”

While the race was competitive, the times on the three-mile course were a bit slow given the dry conditions and overcast skies. Malter crossed the tape at 17:12, followed by senior Nick Slay (17:31, 7th overall) and sophomore Jordan Tufts (17:35, 9th overall). Rounding out the scoring for the Jays on the day (the top five runners factor into the team totals) were sophomore Ryan Guillot (18:41) and junior Hayden Ricca (19:12). 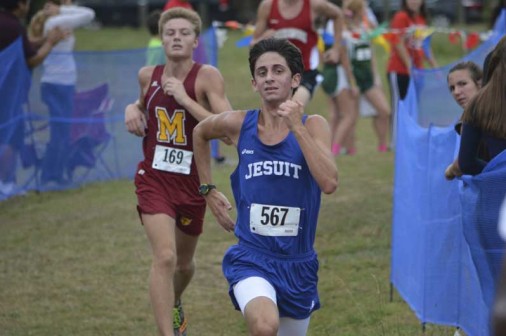 Sophomore Ryan Guillot beats our a Crusader in a sprint to the finish.

Horvath also singled out his scoring sophomores for praise. “Jordan (Tufts) was right there with Nick. And that may have been Ryan’s (Guillot) best race.” “I love it when the younger guys hang with the upperclassmen like that.”

Next across the line for Jesuit’s ten-man squad were junior Max Bell and sophomore Michael Williams. They were followed by a trio of seniors–Jose Cusco, Jacob Dubos, and Justin Lorio–all of whom were racing for the final time in their prep careers.

“That’s going to be a battle,” said Horvath. “We’re neck and neck with Brother Martin and John Curtis. It’s going to take everything we have to beat those guys.”

“If you’ve never been to a cross country meet, this is the one to go to. The atmosphere is electric. All the schools bring big crowds. I know our guys feed off that crowd.”

Race time is Wednesday at 4:45 on the City Park course at Harrison Avenue and Diagonal Drive.