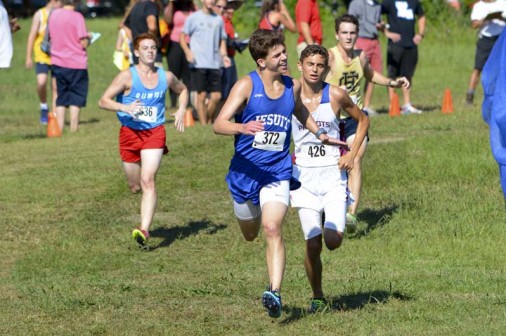 Senior Bert Gilmore holds off runners from Rummel, John Curtis, and Holy Cross as he sprints to the finish. Gilmore was Jesuit’s second-place finisher on the day.

This week, it was time to check out the rest of his roster. At the Rummel-Chapelle Invitational on Saturday morning in City Park, Horvath ran 15 Blue Jays in their first race of the year. The results were encouraging. Jesuit finished fourth in a 13-team field behind Holy Cross, Rummel and St. Michael the Archangel High School of Baton Rouge.

“When you sit so many of your fastest guys and still finish fourth in a varsity race, that’s pretty good,” said Horvath.

Senior John Nimmo posted the Jays’ best time of the day, finishing the three-mile course in the Top Ten overall with a time of 17:50.By way of comparison, eight Jesuit runners posted times below that at the Episcopal meet.

Senior John Nimmo posted Jesuit’s best time of the day, crossing the line after a three-mile run in brutal heat in 17:50.

Of course, the times across the board were a little slow on Saturday given the brutal, unforgiving heat.

“John ran a really nice race, especially given that he was essentially running in a sauna,” said Horvath. “In fact, all of the guys ran about as well as I expected for this time of year in these conditions.”

Rounding out the scoring for Jesuit on the day (the top five finishers count toward the team totals) were senior Bert Gilmore, sophomore Ben Finicle, senior Evan Ruppert, and sophomore Ryan Guillot.

The team splits things up next weekend. There’s not much rest for the weary, as the group from the Rummel meet laces up their collective sneakers again on Thursday, Sept. 24 at the Newman Invitational in Audubon Park. The top-tier runners, meanwhile, hit the road for the Gulf Coast Stampede in Pensacola, Fla.