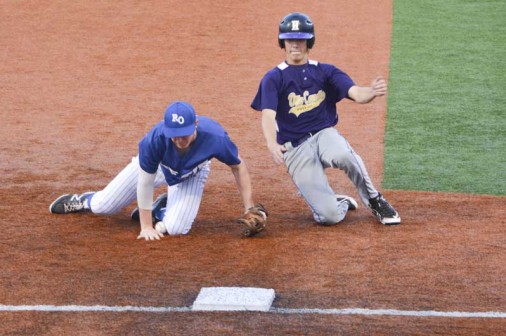 Third baseman Hayden Fuentes juggles the ball as an Otto Candies runner slides into third. After the fact, however, Coach Joey Latino convinced the home plate umpire to overrule the safe call on the play, arguing that Fuentes tagged the runner after he overslid the bag. The call ended the inning and took a third run off the board.

Brandon Briuglio pitched five and two thirds innings on Friday night at John Ryan Stadium, striking out nine batters and giving up only two runs, both unearned, as Retif Oil notched its fourth victory in a row in American Legion play with a 5-2 win over Otto Candies (Hahnville).

Retif opened the scoring in the third inning, loading up the bases with nobody out on a Ben Hess single and walks drawn by Daniel Edmund and Trent Forshag. The big inning the Jays hoped for didn’t materialize, but Harrison Daste did manage a sacrifice fly to give Retif a 1-0 lead heading into the third.

That big inning would eventually come in the fourth. Briuglio helped his own cause in the four-run frame with an RBI single. But it was last night’s hero, Nick Ray, who had the big hit of the inning, atoning for a missing an earlier signal on a hit and run with a two-out, two-run single to right field. Retif’s other run in the inning came on a wild pitch. 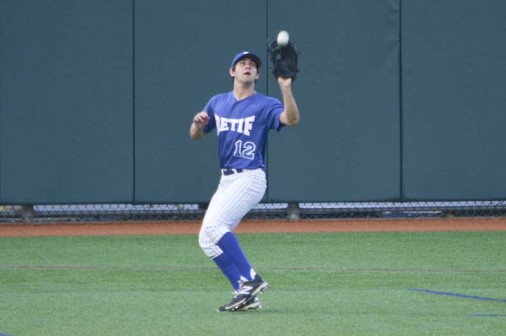 Mark Beebe looks a fly ball into his glove.

The Jays didn’t have much time to enjoy their cushion, however. Briuglio got into a jam of his own in the sixth inning and was pulled by Coach Joey Latino with one run already in, the bases loaded and two outs. Logan Hornung got out of the inning with only one more run. He got a huge assist from Latino, who somehow convinced the home plate umpire to overrule a call on the field on a tag at third base, ending Otto Candies’ threat and pulling a third run off the board in the process. An apoplectic David Baudry (the Otto Candies coach), who had the best view of the play on the field, showed remarkable restraint after the call, managing to stick around for the end of the game in a situation where most coaches would have lost their cool and been tossed.

With the win, Retif is now 5-4 on the season. Next up is a doubleheader with Abbeville on Saturday, June 12. First pitch is 11:00 a.m. at John Ryan Stadium.