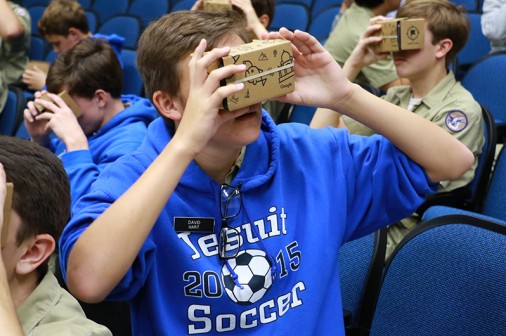 David Hart looks through a Google Cardboard viewer to take a virtual field trip to Barcelona with his Spanish class. Click photo to view gallery.

More than 200 Blue Jays in Spanish and social studies classes went on field trips across the world, travelling hundreds of thousands of miles in a single day – all without ever packing a bag, getting on a plane, or even leaving the auditorium. The students took the international virtual trips courtesy of a new technology called Google Expeditions.

Expeditions allows teachers to immerse their classes in worldwide experiences and bring abstract concepts to life. The virtual field trips take place using Google Cardboard, a virtual reality viewer made almost entirely of actual cardboard. The viewers have a smartphone placed inside them that displays a virtual reality panorama of the location of your choice.

Spanish teacher Ms. Nilda Rivera learned about the Google Expedition Pioneer Program through an online professional development seminar she was completing and inquired about bringing it to Jesuit – and, in turn, helped Blue Jays be the first in the state, and among the first around the world, to experience the technology.

Using a handheld tablet, teachers selected a destination and the Cardboard viewers allowed the entire classroom to jump there automatically. Teachers lead the adventure by selecting points of interest.

Students in Spanish classes were able to explore several Spanish-speaking locales, such as Machu Picchu, Barcelona, Mexico City, and the Galapagos Islands, among others.

“I’ve never been able to travel internationally, so being able to see the culture and the architecture of places outside of America was incredible,” said junior Ean Neyrey. “When we were in Machu Picchu, the stones looked like they were right there. It felt like you could reach out and touch them.”

Spanish classes spent the day before their Expedition discussing the definitions of beauty and aesthetics. Students completed classwork that helped them compare some of the most famous architectural works across the world, discussing what they had in common and what made them beautiful and culturally significant.

That class activity primed them for the discussion they had while on their international Expeditions.

“I’ve wanted to travel the world for a long time, and now getting a glimpse of it with Google Expeditions, it makes me want to go even more,” said junior Alex Welsh. “I want to see Machu Picchu in person and actually be able to touch the ruins, to go to Barcelona for real, and see the Galapagos Islands – all these scenic places we visited virtually today – I want to go in person now.”

The teachers were grateful to be able to lead the virtual journeys and show their students places they might not be able to visit otherwise.

“Some students are lucky enough to be able to travel with their families, or have taken international service trips, but most Blue Jays haven’t been able to go to many of the Spanish-speaking countries,” said Dykema. “We’re grateful to be able to experience this technology. It is a really cool way to be able to visit these places, explore the terrain, and experience the culture with the entire class.”

Created with input from The Wildlife Conservation Society, PBS, the American Museum of Natural History, the Planetary Society, and the Palace of Versailles, there are more than 100 Expeditions locations across the globe. Each location provides a unique way for teachers to integrate virtual reality into their classes.

“I could always show them a photo, but to be able to put yourself in the position and have a 360° view, is great for the class,” said Trosclair. “We saw the Egyptian pyramids [at Giza] and the students were noticing the visitor center. So you feel like you’re right there – it really brings the history lesson to life.”

Trosclair says after working with the technology, he sees how he could incorporate it into future lesson plans.

“When we discuss the Palace of Versailles and Louis XIV, we talk about how the palace played such a huge role in Louis XIV becoming a powerful king by trying to awe his guests,” said Trosclair. “We could actually go into the Hall of Mirrors, where three major events in history happened. And [the students] could see it up close and feel like they are there, stepping back into history.”

Google plans to introduce more than 2 million Cardboard viewers in the near future.

For the Jesuit teachers and students who participated in the pilot program, the sooner, the better. 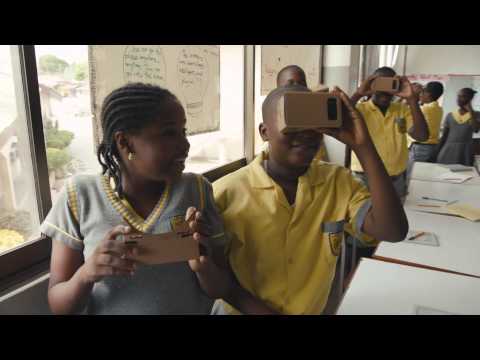