Blue Jay Baseball: “No Time for a Pity Party”

Jays Fall to Rummel in Extra Innings, then Next Day Lose on the Road 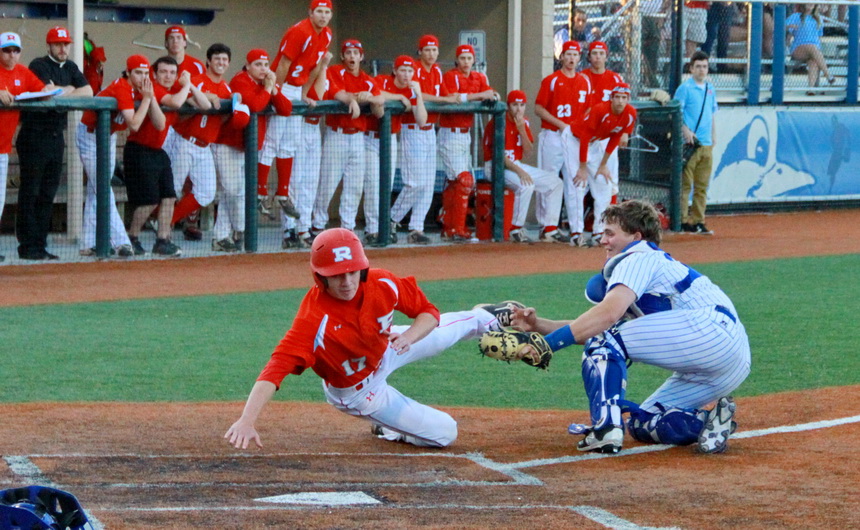 Catcher Trent Forshag takes a perfect throw from right fielder Ben Hess and tags this Raider out in the 9th inning.

The Blue Jays lost a tough one, 6-5, in extra innings to Archbishop Rummel Friday night at John Ryan Stadium. Still groggy trying to figure out all the little things that went wrong and didn’t go right against the Raiders — which added up to a stinging first loss in district play — the Jays boarded a bus on Saturday for a non-district game against St. Michael’s in Baton Rouge. It was a lackluster performance by the visitors whom the Warriors conquered, 2-1, and marks the first time this season that Jesuit has lost two games in a row.

The Jays (16-6; 1-1 in District 9-5A) will recoup at practice this week before playing Brother Martin on Wednesday, April 1 at John Ryan Stadium. First pitch is 7 p.m. 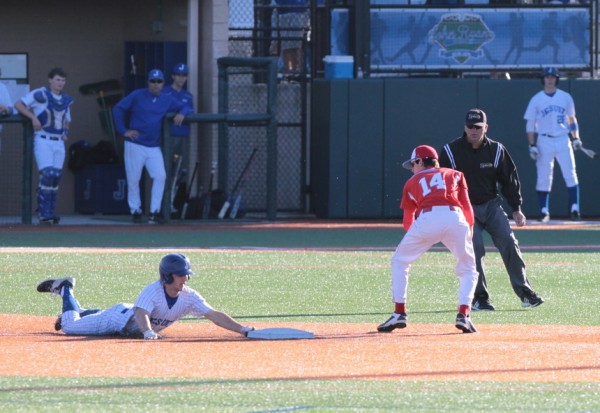 Ben Hess slides safely into second base with a double.

Against Rummel, the Jays played catch-up the whole game, spotting the Raiders one run in the first. In the second, Jesuit got it back. In the fifth, Rummel scored three runs to take a 4-1 lead. In the bottom of the inning, the Jays got all of them back, plus one to cling to a 5-4 lead. Then in the seventh, Rummel tied the game on an unearned run and the Jays couldn’t answer. In the tenth, Rummel scored on an error and the Jays — try as they might with men on first and second in the bottom of that inning — hit into a double play to end the game.

Following their loss to the Warriors on Saturday, Coach Joey Latino told Nola.com’s Jerit Roser: “We were anemic on offense. We had opportunities — men on second and third, guys in scoring position — in four innings that I can recall and just couldn’t get the big hit. We’re struggling right now. We’re trying. The kids are working hard. The kids are doing everything they’re coached to do. We’ve just got to keep practicing and keep working.

“We’re right in the heart of district, so we’ve got some tough games coming up. There’s no time to feel sorry for yourself. It’s no time to have a pity party. You’ve just got to get back to work on Monday and have two good practices and get ready for a very good Brother Martin team.”

Until Friday night, Rummel has not been able to beat Jesuit in over two years. In 2014, the Jays swept all four games the two teams played and the Jays bested their rival twice in 2013. In 2012, they split the series, 1-1, with both games needing extra innings to produce a winner. In the first game the teams played back in 2012, the Raiders won, 1-0, in the bottom of the ninth inning. Two weeks later at John Ryan Stadium, the Jays beat Rummel, 1-0, in that epic 18-inning extravaganza.