At Morning Assembly, Alumni from the Class of 1983 Kick Off Thanksgiving Drive 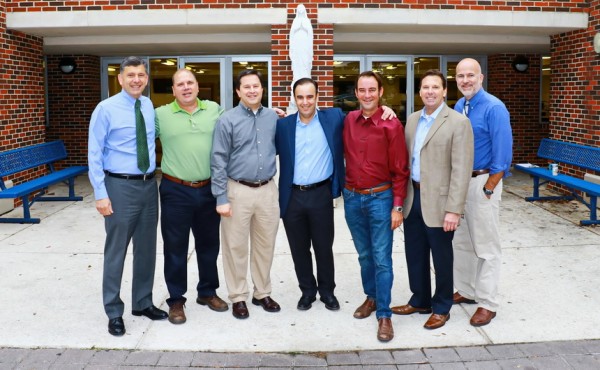 Alumni from the Class of 1983 were at Morning Assembly to address Blue Jays about the importance of the upcoming Thanksgiving Drive. From left are Greg Ernst, Mike Varisco, René Alvarez, Mark Alvarez (who spoke on behalf of the class), Malcolm Schwarzenbach, David Martin, and Jay Combe.

In an annual fall rite, a representative of the Class of 1983 stood before more than 1,400 Blue Jays assembled in Traditions Courtyard and encouraged them to do their best in the upcoming Thanksgiving Drive.

Why a member of the Class of 1983? Because for the past 20 years, they have embraced the drive as a means of helping the less fortunate. They provide a turkey for every family being fed, this year 450. And so on Monday, November 9, Mark Alvarez ’83 (middle of photo) asked the Jays to consider their gifts and to give of their bounty reminding them of the words of Jesus, “Truly I tell you, whatever you did for one of the least of these brothers and sisters of mine, you did for me.’” (Watch video below.)

Over the next two weeks, the students will bring in food items to provide a Thanksgiving meal for at least four families. Also, they will collect the funds necessary to complete the baskets with perishable items such as a pie, bread, and milk. But one important item they will not have to worry about, thanks to the generosity of 1983, is a turkey.

Alvarez, the chairman of 1983’s 2015 campaign to support the drive, was backed by his classmates (in the photo, from left) Greg Ernst, Mike Varisco, René Alvarez (Mark’s cousin), Malcolm Schwarzenbach, David Martin, and Jay Combe. Each year the 1983 committee appeals to their classmates to provide the funds not only to purchase the turkeys for that year but also to grow an endowment to eventually fully fund the turkey drive.

The Class of 1983 takes the Jesuits’ motto Men for Others quite seriously. 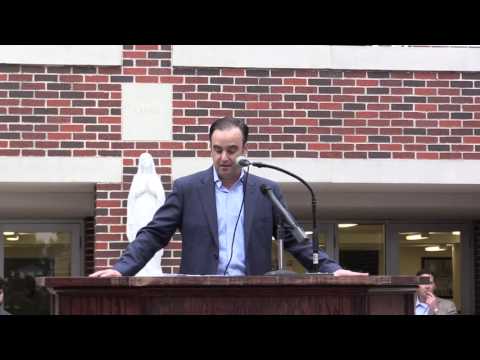