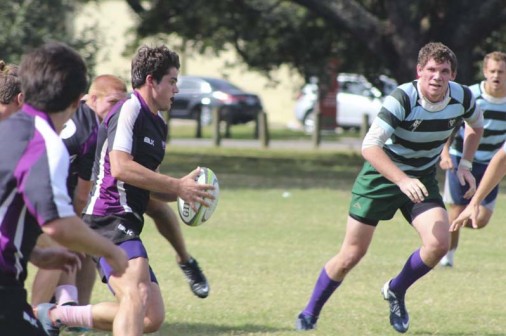 Jacob Campos ’13, who played football and rugby for Jesuit, has developed into a leader of the Spring Hill rugby team.

Spring Hill is at the top of the Deep South Men’s Division II Conference with three dominant victories, and a Blue Jay is a big part of the small Catholic School’s success.

Jacob Campos ’13, who wears number 8, is a power-running forward. He scored three tries in this past weekend’s defeat of South Alabama, and, says head coach Justin Goonan, he is more than just an offensive threat. “He has become a leader,” said Goonan. “He brings energy to the team.”

The junior psychology major got his rugby start at Jesuit High School in New Orleans, where he also played football for the Blue Jays. With that experience came an expectation of how college rugby should be. While some players on Spring Hill had trouble with the transition from social club sport to official club sport with certain varsity perks and expectations, Campos has embraced the change.

“From the get-go, I was very excited for our 2015 fall season,” said Campos. “I was really eager to meet thirteen new faces – ten of them freshman – that I have never seen or played rugby with before. When speaking of personality and game play, I had no clue what to expect from them.”

Any apprehension about not knowing his teammates evaporated quickly.

“Something clicked instantly between us all, and we got off to a great start and have only been growing on and off the pitch since,” said the Spring Hill loose forward. “We continue to work hard during our training sessions and look to whatever challenge is placed before us on a week-to-week basis. We grow from last week’s mistakes, learn from them, and then focus on our goals and objectives for the upcoming week.”

It’s no surprise that Campos is talking all about the team, as Goonan said, that’s why he’s been playing so well.

“We will continue try and to keep improving our performance every week because there are always aspects of the sport that can be improved on no matter who the team is,” said Campos.