Against the Raiders, Blue Jays Dig Themselves a Deep Hole 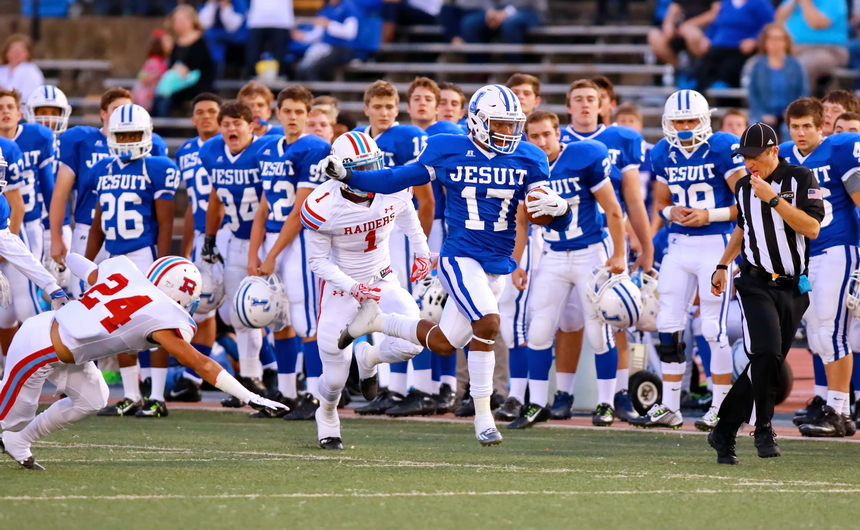 Kalija Lipscomb hugs the sideline as he races 80 yards to put the Jays on the scoreboard against Rummel in Saturday night’s game.

View the Photo Gallery of the Jesuit – Rummel Game

When the clock at Tad Gormley Stadium showed 0:00 on Saturday night, the final score was 28-14. Rummel had the 28 points, Jesuit had 14. How many fans realized that it was the same score, although reversed, as the 2014 season’s semifinal playoff game? Last year the Jays lost to Rummel, 10-7, during the regular season, but that semifinal game at Gormley a few weeks later was all-Jesuit. The 28-14 win in the semifinals was a shock to the Raiders and catapulted the Blue Jays to their first state football championship in 54 years. 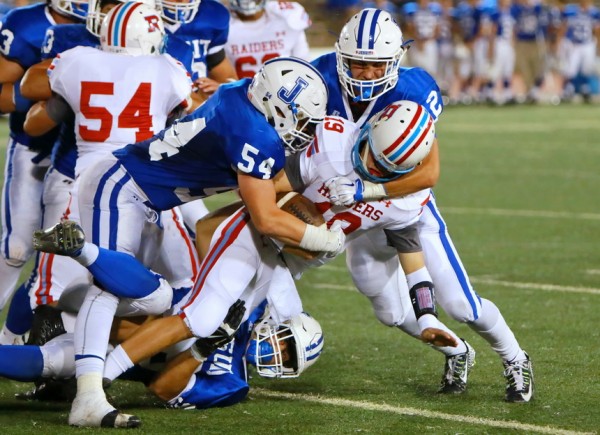 Linebacker Cameron Crozier (54) and defensive back Mark Beebe (22) team up to stop this Raider’s progress.

But that chapter is closed and this past Saturday’s game against Rummel is also history. Played before a sparse crowd of fans from both schools (supposedly, LSU playing Florida sapped the attendance of anything prep that evening), this district contest, when it was over, had sucked the wind from the wings of the Blue Jays.

The Jays are 2-5 overall and 0-4 in district. Jesuit’s next opponent is Archbishop Shaw. That game is scheduled Saturday, Oct. 24, at Hoss Memtsas Stadium on the Westbank with kickoff at 2 p.m. Tickets may be purchased at the Jesuit switchboard all this week from 8 a.m. – 4 p.m. Tickets are $6 for adults and $3 for children (ages 6-11). Faculty and student IDs, along with season passes, will be accepted at Hoss Memtsas Stadium. All tickets purchased at the gate are $8.

The Jays spotted the Raiders two touchdowns in the first quarter, a 14-0 lead equivalent to the large hole the Jays had dug for themselves. When quarterback Peter Hontas connected with Kalija Lipscomb on a short pass that the senior wide receiver turned into an 80-yard sprint into Rummel’s end zone, there was a glimmer of hope for the Jays.

But the Raiders came right back with a long drive and took a 21-7 lead into the locker room. Jesuit appeared flat and Rummel made it 28-7 early in the fourth quarter. The Jays tacked on their second TD on a Hontas to Bryce Musso 21-yard touchdown pass with under a minute left in the game. 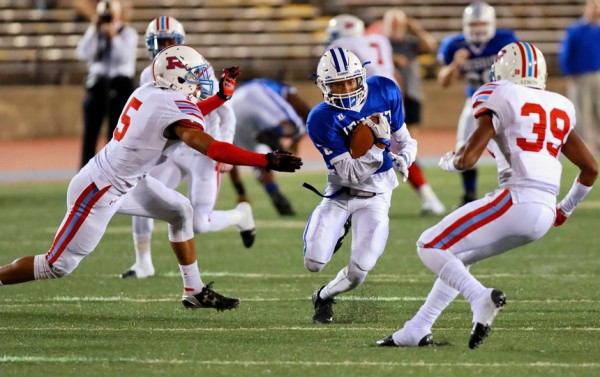 Malachi Hull tacks on some 25 yards after catching a pass.

As they say, too little, too late.

“We couldn’t get anything going on offense and that’s kind of what you expect from a great defensive football team,” said Coach Mark Songy, adding that Rummel has “a terrific defense, great speed, and they’re well-coached. Honestly, the way we approach everything each week, we just come out and prepare for each ball game separately. We never look forward, we never look back. It’s just going to be more of the same.

“Up until tonight, we were a play away from making some great things happen,” he told reporters on the field. “But Rummel’s a great football team and they had something to say about that. We had some dropped passes tonight and Peter (Hontas) threw some good balls at the same time. We need to have those drops back because those are hugely important.”

Nola.com: Rummel too physical for Jesuit in 28-14 Catholic League victory