Against All Odds, the Retif Oilers Snatch a Walk-off Win from Brooklawn, NJ in the 10th Inning 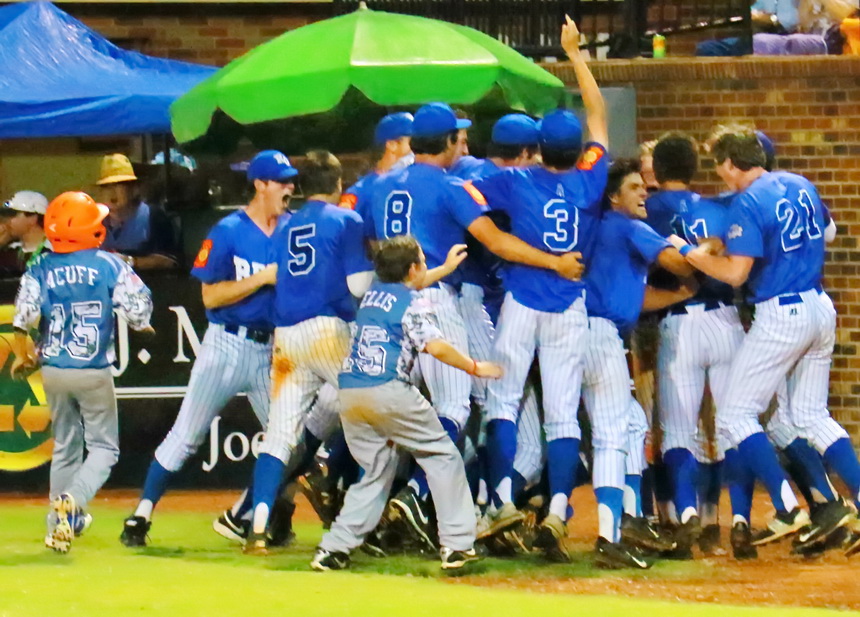 The Retif Oilers mob Trent Forshag whose bases-loaded single in the bottom of the 10th inning resulted in a walk-off win against Brooklawn, NJ in a Monday night semifinal game at the American Legion World Series in Shelby, NC. The Oilers will play South Carolina Tuesday evening for a national championship.

Faces in the Crowd Story

Faces in the Crowd Photo Gallery

View the Photo Gallery of Game 4 (Semifinal) of the ALWS: Retif vs Brooklawn, NJ

View the Photo Gallery of Game 3 of the American Legion World Series: Retif vs Midland, MI

View the Photo Gallery of Game 2 of the American Legion World Series: Retif vs Chapin-Newberry, SC

View the Photo Gallery of Game 1 of the American Legion World Series: Retif vs Cromwell, CT

The Retif Oilers, the American Legion baseball team of Jesuit High School, pulled off one of those storybook miracle wins Monday night against Brooklawn, NJ, the defending World Series champion, in a semifinal game that stretched to the 10th inning in Shelby, NC.

As an intermittent mist fell on Veterans Field at Keeter Stadium, the Oilers were two outs away from elimination at the American Legion Tournament. Down 3-2 after Brooklawn scored an unearned run on an error by catcher Trent Forshag in the top of the 10th inning, the Oilers did what they’ve done all season long.

They didn’t give up. They remained focused. They fought back in the bottom of the inning.

David Friedman, a freelance writer covering the Oilers for The New Orleans Advocate, astutely observed that if Brooklawn has been the dominant force of American Legion baseball for the past four years, Retif just might be their kryptonite. 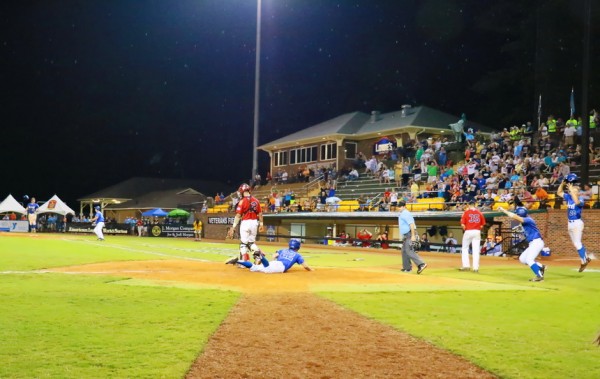 In the bottom of the 10th, the Oilers have the bases loaded with one out when Trent Forshag smashes a grounder to left field. Nick Ray (far right) easily scores the tying run from third base. Connor Maginnis, who was on second base as a pinch runner, dives for home and plates the winning run. In the distance on the left is Forshag, who is already celebrating Retif’s 4-3 walk-off win against Brooklawn in the featured semifinal game at the American Legion World Series.

A single by Nick Ray put the tying run at first base. A wild pitch advanced Ray to second. Brandon Briuglio’s patience at the plate was rewarded with a walk. That’s when Brooklawn called time out and brought in a reliever for their starting pitcher, Dante Scafidi, who had the Oilers flummoxed most of the game. Scafidi threw cold water all over Retif’s bats. He gave up a measly five hits, walked five, and fanned 10 Oilers.

The relief pitcher faced Ben Hess, whose hitting streak has him batting .500. Hess laced a single to left field to advance Ray to third and Briuglio to second base. Connor Maginnis was sent in as a pinch runner for Briuglio. With the bases loaded, the Oilers’ fans in the grandstand were, well, they were going nuts.

As crazy as the grandstand was, there was no sense of panic among the Oilers. In fact, Retif’s dugout was an oasis of serenity, a surreal calm saturating the players like mist on their baseball caps. One could feel the confidence and faith that permeated throughout the dugout.

Trent Forshag hits in the clean-up spot and it was his at-bat. Forshag had just made two uncharacteristic throwing errors in the ninth and 10th innings, overthrowing second base on a steal and overshooting first base on a sacrifice bunt. The errors must have weighed heavily on Forshag, who wears his heart on the Retif patch of his uniform and was often the spark plug when things weren’t going well for the Oilers during the season. 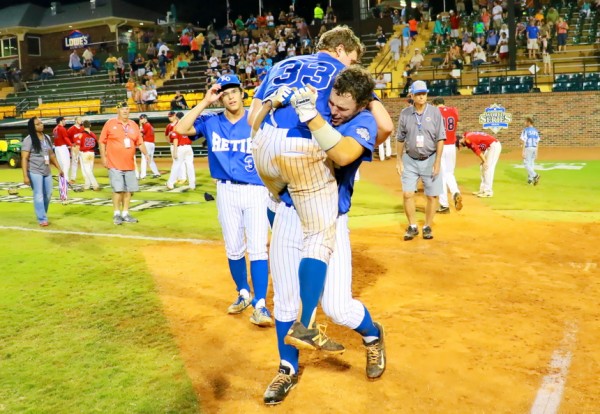 Outfielder Scott Crabtree lifts Trent Forshag in jubilation after the catcher drove in two runs in the bottom of the 10th inning with a single to left field. The 4-3 walk-off win over Brooklawn, NJ in the semifinal game catapults the Oilers into the American Legion World Series championship Tuesday night against Chapin-Newberry, SC.

The catcher turned to Coach Joey Latino and asked if he should take a strike on the first pitch. “No,” Latino replied without hesitation. “I want you to hit a single and win this game.”

The first pitch was a ball. On the second pitch, a fastball in the strike zone, Forshag ripped his second single of the game, a hard grounder between third base and shortstop. Nick Ray easily scored the tying run from third base and Coach Latino frantically waved in Connor Maginnis from second base. Maginnis dove for home plate and could have scored the winning run standing up. The Brooklawn catcher never got the throw. The game was over.

The Oilers emptied the dugout and rushed to Forshag, who was already jumping up and down with assistant coach Kenny Goodlett near first base. The players mobbed Forshag. Many had tears streaming down their flushed cheeks. The Retif fans were going wild; the Brooklawn side of the grandstand was silent as the mist. Brooklawn would be going back home, their quest to win three consecutive World Series championships disintegrating with the crack of Forshag’s bat.

Retif stays to play another day, advancing to the championship game Tuesday night against Chapin-Newberry, SC. The game gets underway at 7 p.m. (6 p.m. New Orleans time).

Back in early June, after a 1-4 start, no one would have picked the Oilers to go anywhere except to practice. When district play began and Retif lost their first two games, who would have guessed that they would be the district champions by winning, what, seven straight games? 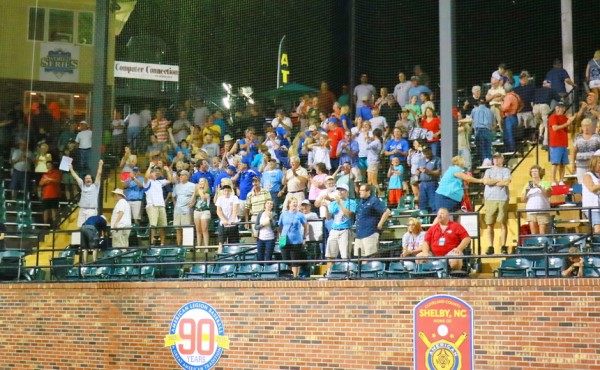 Fans of American Legion and Jesuit baseball would have looked at you funny if you said out loud that Retif’s season would result in a state championship and then a Mid-South Regional title; that Retif would win their “Stripes Pool” to advance to the final four at the American Legion World Series in Shelby; that in the semifinal game Retif would come from behind and defeat a talented New Jersey team with a record of 46-7; and, finally, that Retif’s own record would be 35-6-1 going into a World Series championship game.

They’d think you were crazy. And you would look them in the eyes and say that’s the Forshag Redemption.