Jesuit Thanks Generous Donors and Volunteers at 1847 Society Reception 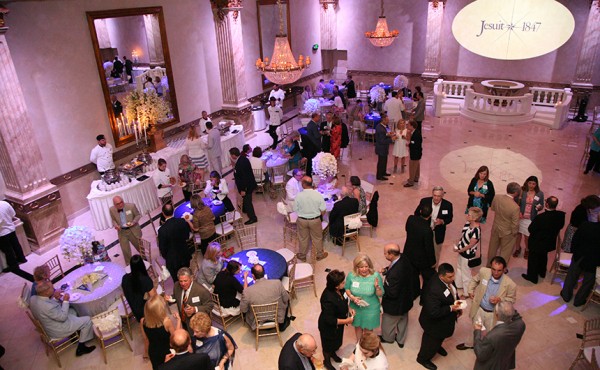 Approximately 300 benefactors of the 1847 Society attended the annual donor reception at The Balcony in Metairie.

Approximately 300 benefactors were warmly thanked for their loyalty and generosity to the school by an appreciative Fr. Anthony McGinn, S.J. ’66, president of Jesuit, at the annual 1847 Society donor reception. The event took place on Sunday, Aug. 23 at The Balcony in Metairie.

During the formal program, Fr. McGinn used the backdrop of the 10th anniversary of Hurricane Katrina to thank supporters, provide guests with a review of the past year, and look ahead to 2015-16. Completed projects include a renovation of the historic Holy Name of Jesus Chapel (small chapel), the shoring and leveling of Traditions Courtyard, and the renovation of six classrooms on the second floor of the administration building. Jesuit will renovate six additional classrooms next summer and add air-conditioning to the Jesuit gym. Fr. McGinn also thanked Fr. Raymond Fitzgerald, S.J. ’76 for his outstanding leadership and for his work in formulating the school’s current master plan.

In addition to thanking benefactors, Fr. McGinn recognized Robert Bartlett ’75 for his generous service as chairman of the President’s Advisory Council (PAC) and Michelle Lorusso for her outstanding work as co-chair of Celebration, Jesuit’s annual gala and auction.

The formal program concluded with a surprise. Dave Schof, an alumnus from the Class of 1956 and grandparent of three current students, brought his tenor saxophone and led attendees in the singing of the alma mater. Three of Schof’s grandsons are members of the Blue Jay Marching Band, following in their grandfather’s footsteps.

Eight members of the Society of Jesuit joined Fr. McGinn at the event: Brs. Billy Dardis and Terry Todd — both members of the Class of ’58 — Frs. Norman O’Neal, John Brown, Billy Huete, and Kevin Dyer, and Messrs. Julio Minsal-Ruiz and Stephen Kramer, who are scholastics in formation.

Check back for a photo gallery of the 1847 Society donor reception.