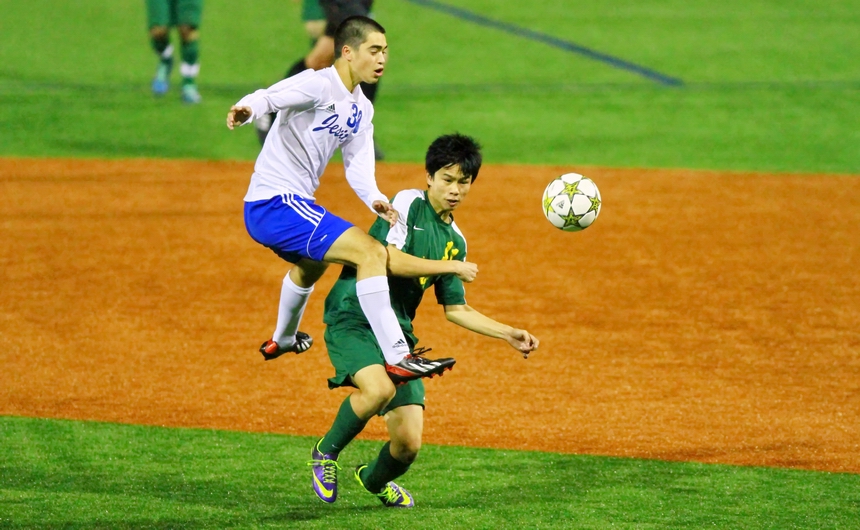 Chase Rushing reaches the ball first but feels a Bulldog encroaching on his space in Jesuit’s regional playoff game against Baton Rouge High on Thursday evening at John Ryan Stadium.

Jesuit defeated Baton Rouge High, 2-1, in a spirited and physical regional playoff soccer match Thursday evening at John Ryan Stadium, propelling the Jays onto the road for a quarterfinals game against Sulphur on Tuesday, Feb. 18.

Senior Cameron Coulon, on a fast break, scored in the 27th minute to give the Jays a 1-0 lead. But the Bulldogs evened the score with about six minutes left in the first half. Senior Evan Kramer rifled a shot from 15 yards out in the 62nd minute to notch Jesuit’s second goal.

The Jays had three opportunities to put the match away with penalty kicks, but none of the Jesuit kickers could smash the ball past the Bulldog goalie. With the Jays failing to capitalize on the penalty kicks, the defense stepped up and shut down the Bulldogs.

The Blue Jays will take to the road on Tuesday, Feb. 18 to play 14th-seeded Sulphur which shocked the 3rd-seeded Catholic Bears, 2-1. The Jays are seeded sixth. The time of the match will be determined on Friday.