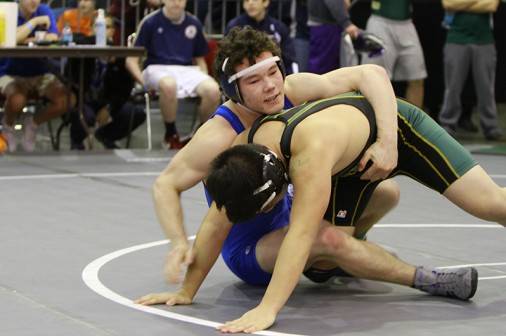 After the first day in the LHSAA state wrestling tournament, top-seeded Guy Patron, Jr. (182) is headed to the semifinals, along with several of his teammates.

The Blue Jay wrestling team had a solid start in the LHSAA State Wrestling Tournament on Friday, Feb. 21 at the Pontchartrain Center in Kenner. After starting the meet with 12 of 14 seeded wrestlers, including three top-seeds, 11 Blue Jays advanced to the quarterfinals Friday evening.

The semifinals begin Saturday morning at 10:30 a.m., with the finals set for 6:30 p.m. Saturday evening.

For live updates throughout the day, search #snwrestling on Twitter. Or watch the semifinals and finals live via the LHSAA Streaming Channel.

Nola.com – Vote for Jesuit: Which wrestling team will win the Division I team championship? (Poll)

LaWrestlingNews.com – DAY ONE SYNOPSIS IN BRIEF: Tight races in Divisions I and II, as well as for the runner-up spot in Division III