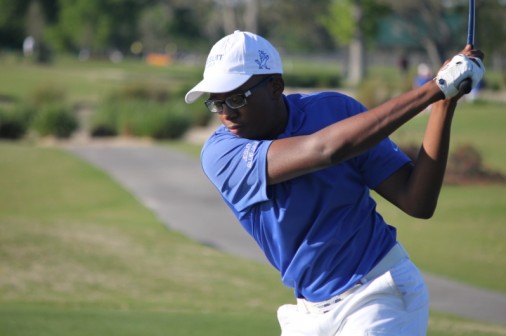 Most district golf matches are decided by combining the top four scores from each team. Not the match that featured Jesuit and Brother Martin on Wednesday, April 9 at Lakewood Golf Club.

The top four golfers from each team combined to shoot 154s, leaving the Blue Jays and Crusaders tied. Jesuit’s 5th best score was three shots better than that of his Crusader counterpart, giving the Blue Jays the victory.

Senior Cole Johnson shot a 37 — the lowest round of the day for the Jays. Senior C.J. Blagrove was one stroke back at 38. Senior Alex Anderson shot a 39 and senior Will Dufour recorded a 40, as did sophomore Grant Glorioso.

Blue Jay alternate Nolan Lambert — a freshman — carded an impressive 37 which was not counted.

The Blue Jays face Holy Cross on Thursday, April 10. The match will start at 4 p.m. at Lakewood.

Head coach Owen Seiler ’75 has chosen Anderson, Blagrove, Dufour, Glorioso, and Johnson to represent the Blue Jays in the district and state playoffs. Lambert was selected as the alternate.