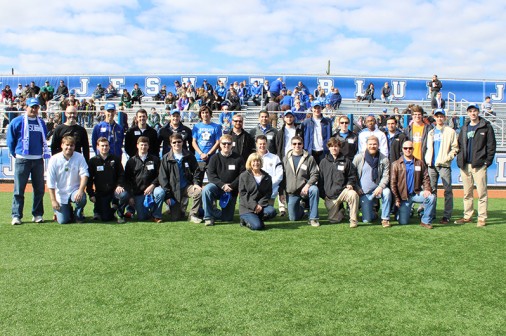 Blue Jay soccer players from the past returned to their alma mater to connect with today’s soccer Jays at the Jesuit Soccer Homecoming on Saturday, Jan. 4 at John Ryan Stadium.

Blue Jay soccer players from the past returned to their alma mater to connect with today’s soccer Jays at the Jesuit Soccer Homecoming on Saturday, Jan. 4 at John Ryan Stadium. Special guests of Soccer Homecoming 2014 were the state champions of 1999 who this year are celebrating the 15th anniversary of their achievement.

In a pre-game ceremony honoring the 1999 team, each player received a special certificate. At halftime soccer alumni and their children enjoyed kicking soccer balls around on beautiful Alumni Field, the home of Blue Jay soccer.

Following the victory over the Shaw Eagles, the soccer alumni and their families enjoyed a reception of food, refreshments, and fun in Pontiff Pavilion, all provided by the parents of today’s soccer Jays and the Advancement Office. Throughout the events of the day, former players could be seen sporting their new “Jesuit Soccer Alumni” caps, compliments of today’s soccer program.

As part of our celebration of Blue Jay soccer, we honor a team that holds a special place in the history of the school’s soccer program. Today we honor the State Championship team of 1999 as they celebrate the 15th anniversary of their accomplishment. Coached by the late Garry Ortner, the 1999 team featured a balanced attack with strength throughout the lineup. Pre-district play saw the 1999 Jays capture three tournament championships including the prestigious St. Paul’s Tournament. Entering district play with a perfect 16-0-0 record and a great deal of confidence, the Jays again ran the table to enter the state playoffs with an unblemished 26-0-0 record. After four playoff victories, including a thrilling Lundi Gras double-overtime win over Central Lafourche, the Jays stood at 30-0-0 and facing two-time defending state champions Acadiana. With a 3-0 victory, the magical season was complete. The perfect 31-0-0 season earned the team a #3 ranking in the national high school soccer poll. One sportswriter noted the team’s unselfish play when he wrote “The victory culminated Jesuit’s season long devotion to team goals and commitment to stay within its game.” At one point in the season, Coach Ortner told a reporter, “All I ask is that they play their best.” Indeed, they did and their accomplishment stands as a testament to that ideal. We congratulate the 1999 Jesuit soccer team on the 15th anniversary of their winning the State Championship.