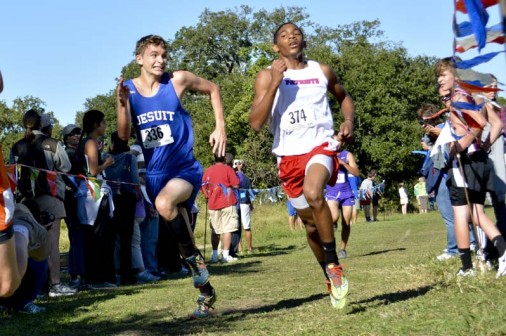 Senior Bailey Graffagnini will not be denied in his final race as a Blue Jay at the Jack Schommer Invitational on Saturday, Oct. 25.

Jonathan Whelan knew he was having a good race, but he wasn’t sure how good until he was finally able to focus on the time clock at the finish line from about 50 meters out. In that split second, he realized he had a chance to do something he’d never done before in his high school cross country career, a career that would be ending in mere moments. And so he “absolutely sprinted” to the finish line, breaking the tape with a personal record of 18:06.

“I’m really happy to go out this way,” said Whelan. “And I’m so thankful to Coach Rudy for giving us this one last opportunity to race.”

Whelan was one of six seniors making his final appearance for the Blue Jays on Saturday morning, Oct. 25, at the Jack Schommer Invitational in City Park. Also competing were Ben Brim, Bailey Graffagnini, Cole Guillory, Blake Jaubert, and Daniel Sagona.

“The guys who ran this morning may not have the times in the low 16’s that it takes to compete at district and state, but make no mistake about it. They are vital to our program,” said Coach Rudy Horvath ’86. “They are what professional sports teams call great locker room guys, wonderful role models for our younger runners.”

Jaubert battled through injuries all year and came into the race hoping not for glory or even a personal record (19:03), but just to break the 20-minute mark one last time in a competitive meet. And break it he did, crossing the finish line with a time of 19:43 to place second for the Jays.

“I have to admit, I choked up a bit at the starting line while Coach was leading us in prayer,” said Jaubert.  “There were a lot of emotions out there. It’s a bittersweet day. But all good things must come to an end.”

Brother Martin, which hosted the meet and used several of its stronger runners, ran away with the team title. Jesuit finished eighth.

Next up for the Blue Jays is the district championship meet on Thursday, October 30 at City Park.