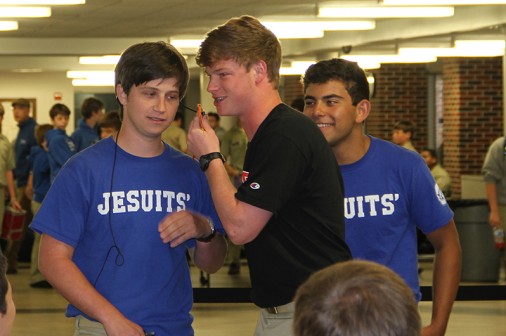 Evan Fitzpatrick (center) takes the microphone from Jorge Abadin (left) after receiving his “award” from Abadin and Quentin Marks (right).

Dressed in shirts representing the colleges they’ll be attending in the fall, seniors spent part of their lunchtime on Tuesday, April 29 bringing truth to the phrase “imitation is the sincerest form of flattery” as three brave members of the Class of 2014 put on their best impersonations of beloved faculty members.

The fun continues on Wednesday when Prefect of Discipline Mr. Top Abshire will break out his yellow rain suit to prepare the slip and slide the members of the Class of 2014 will slip, slide, dive, crash, and fly across — rain or shine.

The well-deserved Senior Week celebration features lunchtime activities each day (see the schedule below), concluding with Commencement Luncheon when graduating seniors are officially welcomed into the Alumni Association.

The Class of 2014 will slip and slide their way into a fun afternoon in this favorite annual activity.

Seniors will gather in the far end of the school yard and on S. Solomon Street to take part in one of the newer traditions at Jesuit — amassing the autographs of their classmates and beloved faculty and administration on their uniform shirts.

After being formally dismissed from their final Morning Assembly as Jesuit students, seniors make their way into the Auditorium to begin Senior Day activities. The main attraction is the Senior Showcase, a chance for Blue Jays to share their talents — and a few laughs — with their classmates. Along the way, they’ll also enjoy a mid-morning snack of donuts and have their class photo taken on the front steps of the school on Carrollton Avenue.

Afterwards, seniors board several school buses and make their way downtown where the 260 members of the Class of 2014 will be officially welcomed into the Jesuit Alumni Association at the Commencement Luncheon. This year the luncheon will be held in the Bienville Club Lounge of the Mercedes-Benz Superdome.

Seniors and alumni guests will hear from speaker Gordy Rush ’86. Gordy is a former standout football player at Jesuit and LSU. Now Gordy is an award-winning broadcaster and media entrepreneur in his native Louisiana. Named the 2013 Broadcaster of the Year by the Louisiana Association of Broadcasters, Gordy transitioned this past season from sideline reporter to color commentator as part of the LSU broadcast team.