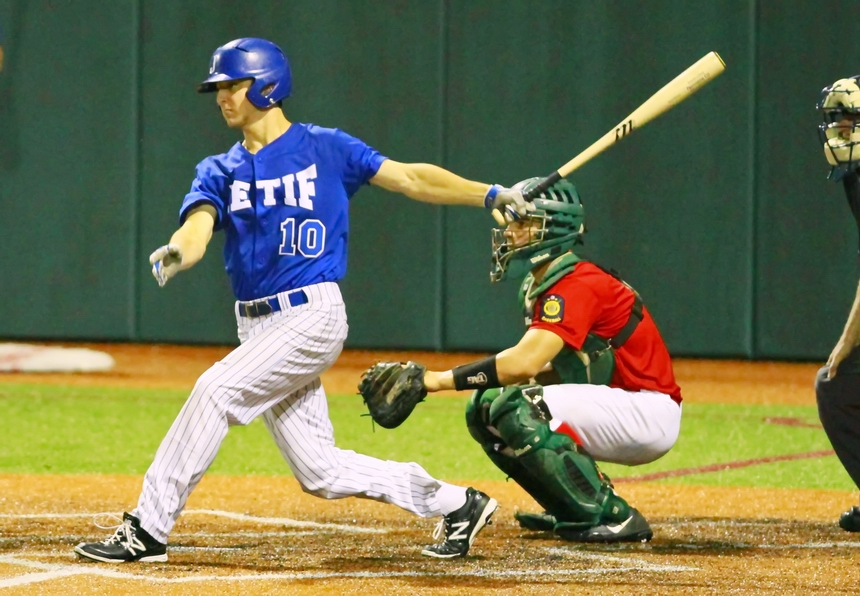 Ben Hess recently returned to the Retif Oil lineup playing right field and batting in the middle of the order.

Thunderstorms Could Wreak Havoc on the Double-Elimination Tournament that Begins Friday, June 27

The regular season for Retif Oil and the three other teams in American Legion’s District 1 was declared over on Wednesday evening, June 25. After two dates were rained out, Retif was scheduled to finally play Ponstein’s (Holy Cross) at Kirsch-Rooney Stadium, but thunderstorms canceled the match-up once again. With the American Legion’s District Tournament set to start Friday, June 27, Legion officials decided to simply call an end to the regular season and get on with the playoffs.

Legion officials declared Retif as the #1 seed in the double elimination tourney that is expected to take the entire weekend to complete. It is also possible that if rain delays kick in, the tournament may not finish until Monday, June 30.The games are scheduled to be played at Kirsch-Rooney but the “Rags” Scheuermann field is delicate and soggy from the near-constant rain.

Retif Oil brings an 11-4 record to the tournament and the team’s first opponent will be Ray Brandt Auto Group (DeLaSalle). The game is scheduled on Friday at Kirsch-Rooney Stadium with first pitch at 7 p.m.

Tournament games are nine innings with a 10-run rule effective beginning in the 7th inning.