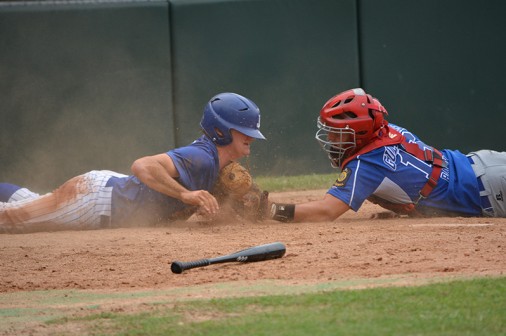 Trent Forshag scores on a close play at the plate in the 7th inning. Forshag had four hits and three RBIs on the day.

Starting pitcher Brandon Briuglio picked up the win with seven solid innings in which he gave up only five hits and two runs. He helped his own cause in the top of the 7th with a two-run double. Dan Edmund also had a two-run double for the Blue Jays.

Retif has a shot at the championship when it plays Refuel (Shaw) Wednesday, July 23 at 4 p.m. at Kirsch-Rooney Stadium. A Retif win would be Refuel’s first loss in this double elimination tournament, and the two teams would play a second and final game 30 minutes later with the state championship on the line. If Retif loses the 4 p.m. game, then Refuel wins the state title and moves on to the Legion regionals in Oklahoma.