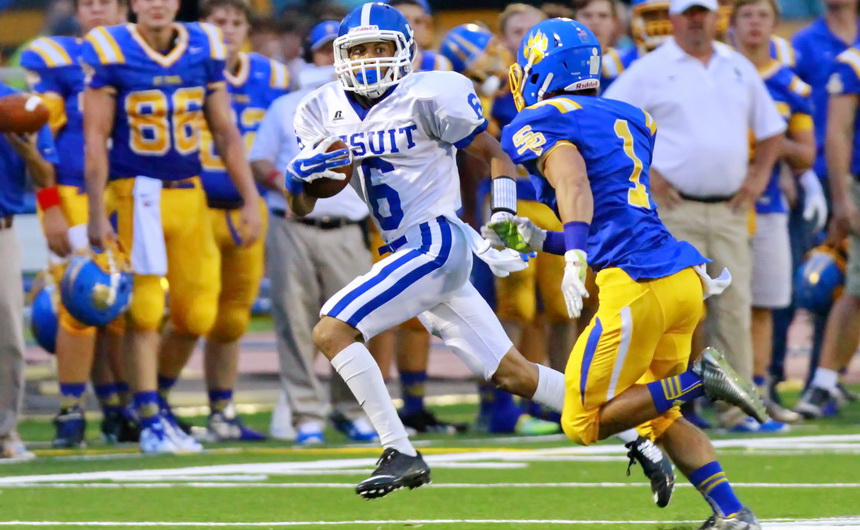 Jesuit stunned St. Paul’s – and maybe the rest of prep football – by routing the Wolves, 49-22, in a non-district game Friday evening before a raucous crowd in Covington.

The Jays were unstoppable on offense and scored seven touchdowns while unleashing a tenacious defense that stuffed the Wolves on nearly every possession.

“This is the Jesuit team I was waiting to see,” said Coach Mark Songy. “You guys were outstanding and absolutely awesome. Our defense was unbelievable and they gave our offense momentum. I am very proud of you and very happy. St. Paul’s is a quality team and we got after them from the opening kickoff to the finish.”

Here’s how the Jays racked up 49 points:

Senior tight end Foster Moreau made a leaping catch of a 12-yard pass from senior quarterback Trey LaForge in the end zone. Moreau hit the turf hard but held on to the ball.

Senior running back Charles Jackson dodged defenders and ran 26 yards for a TD.

Junior defensive back and return specialist Jakirai Wiley electrified the Jesuit crowd when he returned a 63-yard punt return, breaking tackles and reversing field all the way to the end zone.

Junior Kalija Lipscomb caught an 11-yard touchdown pass from Trey LaForge right before halftime which gave the Jays a 28-3 lead.

LaForge hit Lipscomb with a 35-yard pass for the sixth touchdown.

The Blue Jays play their first home game next Friday, September 19 when they host Central High of Baton Rouge. Kickoff at Tad Gormley Stadium is 7 p.m. Tickets are available for $6 at the Jesuit switchboard on Banks Street up until 3:30 p.m. on the day of the game. Tickets at the gate are $8.