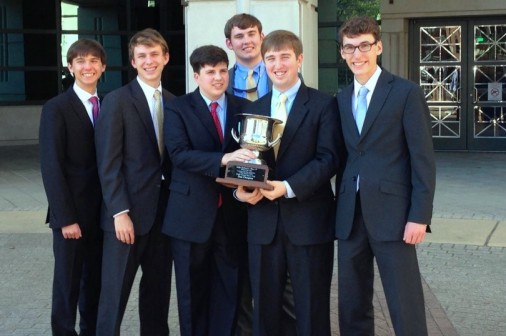 The Jesuit Mock Trial team captured first and third places at the state championship on Saturday, March 29. The competition, which included two groups from Jesuit, took place at the Federal Courthouse in Shreveport.

Jesuit’s younger squad consisting of sophomores Myles Kuss and John Kemmerly, and freshman William Fine (attorneys), and sophomores Ross Barilleaux, Ryan Gaudet, Thomas Hellmers, and freshman B.J. Guient (witnesses) finished third, one notch ahead of Loyola Prep, which was once operated by the Society of Jesus.

Judges are not told the identity of the teams to remove bias.

The Mock Trial team is coached by Brett Wise ’82, Michael Mentz ’74, and John Becknell and Michael Mims ’05. The team is moderated by Greg Ernst ’83.

The championship team earns a trip to the national competition in Madison, Wisconsin on May 8-10.