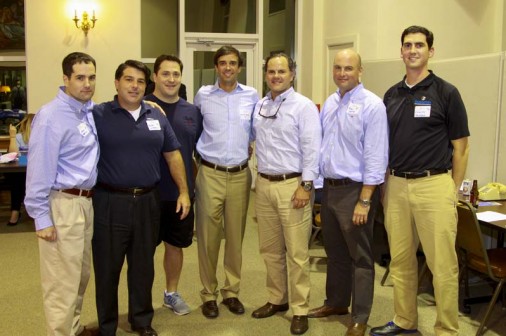 More than 70 alumni representing seven decades returned to Carrollton and Banks on the evening of Tuesday, Oct. 14, to kick-off the 2014 LEF fall calling drive. The Living Endowment, which is used to offset operational expenses of the school, is the alumni component of Jesuit’s annual giving campaign. The LEF, Parents’ Annual Giving (PAG) drive, and Parents of Alumni (POA) drive help keep Jesuit accessible to as many families as possible.

Alumni volunteers secured pledges from 566 of their classmates totaling $216,663. The average commitment was $383. The Class of 1991 turned out the largest numbers of callers — seven.

The evening began with a delicious spaghetti and meatballs dinner and a short presentation in the Student Commons, which included an overview of Jesuit today from president Anthony McGinn, S.J. ’66. The night concluded with calling in St. Ignatius Hall and third floor tributaries. Callers who remained until the end received Jesuit goodies from the office of institutional advancement.

Check back for a photo gallery of the LEF fall calling event.